“The magnificent Gothic Revival church of Saint Peter in central Bournemouth dominates the town with its 202′ (61m) tall spire” by Bellminsterboy is licensed under CC BY-SA 4.0

Today I’m going to give a summary of how I created a 3D building model of a church in the seaside town of Bournemouth in the UK: St Peter’s. The model was produced using a combination of BAE Systems’ SOCET GXP and Trimble’s SketchUp Pro tools. Whilst a number of semi-automated short-cuts of sorts were used, including the use of a Digtial Surface Model (DSM) to check the basic geometry and the use of photo-projection to refine the geometry, the process was largely manual. The creation of a model in a CAD package such as Bentley’s MicroStation or AutoDesk’s AutoCAD would be another, primarily manual approach.

Point clouds can be combined with imagery to form building models, such as in the work of Zhou and Zhou (2014). However the prohibitive cost of obtaining such point clouds for building and city / town / village model creation has increasingly focussed efforts on image-based approaches (Liu and Kang, 2014).

To begin I was provided by the Ordnance Survey with aerial imagery and a DTM (Digital Terrain Model) and DSM of the centre of Bournemouth. This aerial imagery was taken from an aircraft using a very high definition camera where flight paths comprised a number of parallel runs – crucially these runs provided overlap in the images, in the runs either side. Using the principle of stereoscopy from the field of photogrammetry in SOCET GXP a 3D aerial view of Bournemouth could be achieved using a 3D stereo monitor and glasses. This allowed me to look down on to the church in question in SOCET GXP and plot its footprint and the heights of features such as the spire, roof ridges and gables by panning around the church and zooming in and out on the screen to a height that corresponded to the position of a vertex in 3D space. 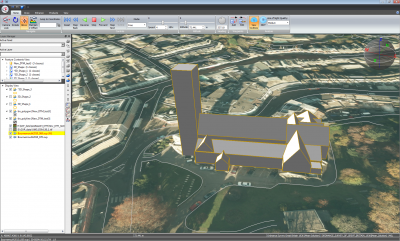 The reason for choosing Bournemouth is that the Ordnance Survey had an amount of data on the town; the choice of church was a personal one in that the church is Grade I listed by England’s listed building planning control body Heritage England and is the burial place of the author Mary Shelley (Frankenstein being, arguably, her most famous work), remembering that my PhD is focussing on buildings of architectural and cultural heritage significance.

In order to discern height when looking down on to the Earth in a stereo set-up I needed to possess stereopsis, the ability to observe stereo acuity. Essentially I needed to be able to see when one object was moving relative to another object when looking straight at the objects and when the objects are next to / on top of one another – threading a needle is a common or garden example of the use of stereopsis. Surgeons and airline pilots for example need to possess extremely good stereopsis capabilty. Thankfully, after taking a stereopsis test at the Ordnance Survey, I was deemed stereo-capable! 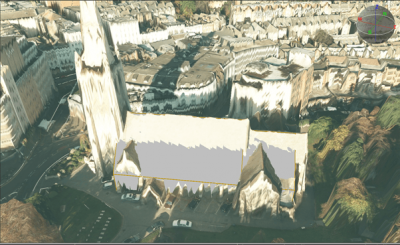 Further refinement of the emergent building model was achieved using SOCET GXP‘s live link to Trimble’s SketchUp. This allowed the enhanced 3D editing capability of SketchUp, including panning in 3D whilst editing (SOCET GXP only allows panning in 2D whilst editing) to be utilised. It also provided a means of exporting the 3D model to SketchUp for off-line editing. SketchUp is one of the most popular 3D editing tools and has a free Make version and chargeable Pro version – I used the Pro version. As a tool it also allows creation of 3D models, with a wide variety of shape templates available. It has a large number of plug-ins available too, which can further extend its functionality. I mainly used the Orbit, Pan and Zoom functions to navigate around the model and the Large Tool Set features to actually draw and edit the model vertices. I found the Push tool particularly useful (and satisfying!) when wanting to extrude or depress a face to create a building component such as a porch or roofline.

I also made use of SketchUp‘s Match Photo and Project Textures from Photo features – see here for their tutorial. Essentially this uses the principle of projection and vanishing points to allow a photo of a building to be used initially to produce the geometry of the building model and then to project the textures from the photo on to the model. 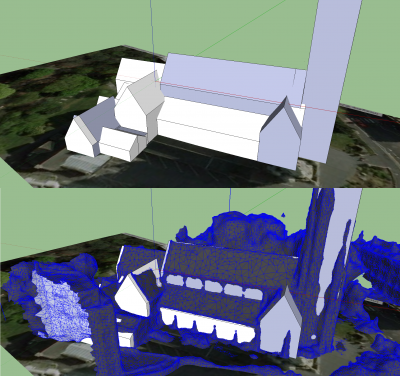 Lastly, to refine things further, I imported a triangular mesh Digital Surface Model (DSM) from the Ordnance Survey into SketchUp. Note that DSMs include buildings, versus Digital Terrain Models (DTMs) which include only land surface – collectively many researchers group DSMs and DTMs under the umbrella term of Digital Elevation Models (DEMs) though not everyone agrees with this! The mesh DSM had originally been converted from a point cloud dataset – there are a number of options out there to do this including various AutoDesk tools, in addition to ISTI – CNR’s MeshLab tool. I used a combination of AutoDesk 3ds Max and MeshLab to first crop the mesh to make the file size smaller for SketchUp, and then convert it to a COLLADA format which SketchUp can import. I then imported the COLLADA .dae mesh model into SketchUp, in the same view of my emergent model of the church. Once that was done I was able to align the imported mesh onto my emergent building model and use the positions of the mesh to then adjust positions of the vertices in my building model.

Note that Trimble’s SketchUp and 3D Warehouse were used under the auspices of Cardiff University.