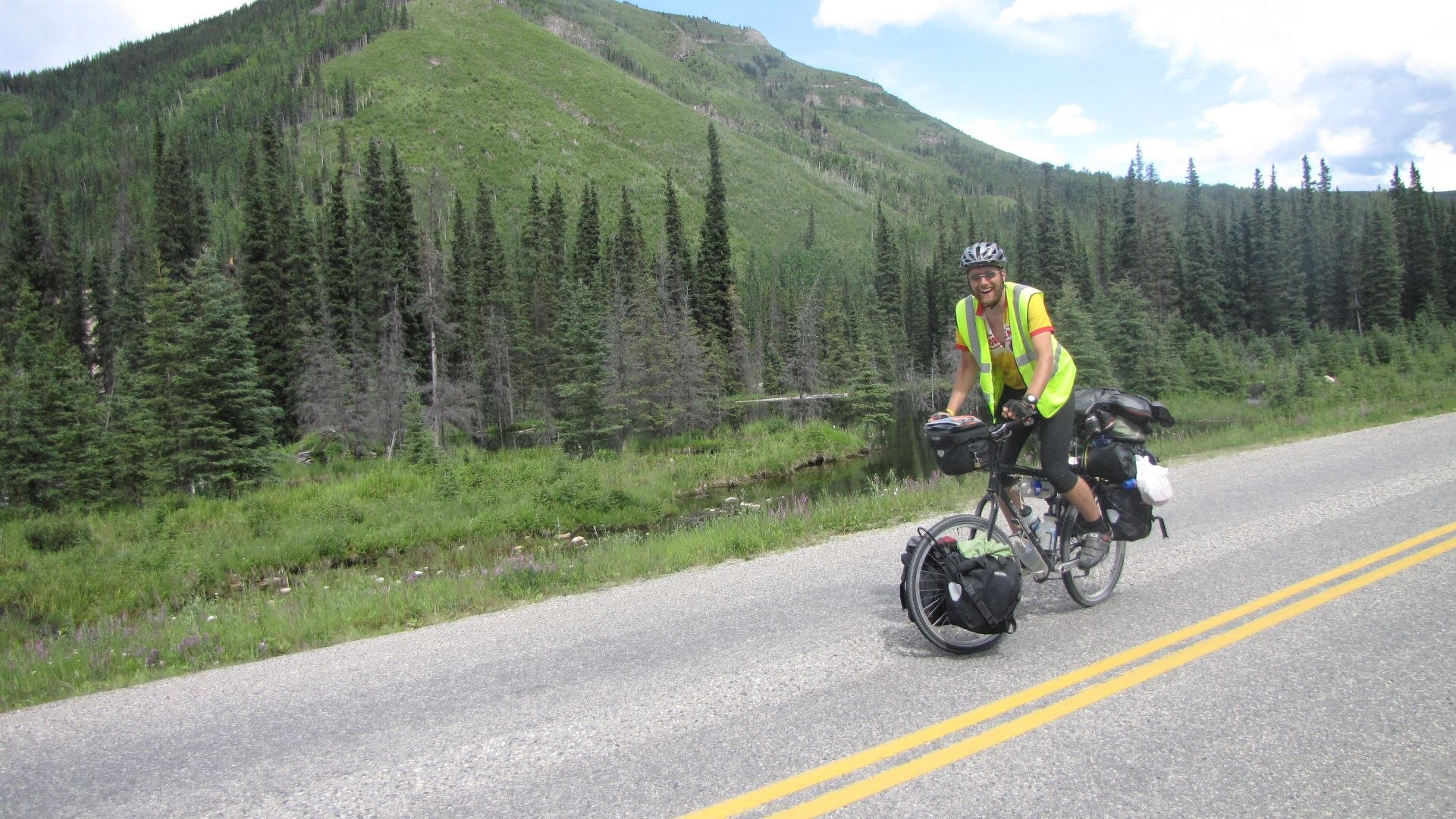 No, I’m not trying for the UK table tennis team at the next Olympics, nor am I breaking the strings on a guitar (which is sort of like the sound…) but the spokes are breaking on my rear wheel.  Just after crossing the Continental Divide in Yukon Territory we notice at camp that I have one (the first…) broken.  After Ward’s kind assistance the spoke is repaired and we set off the next morning but then its ping ping ping ping pingety-ping as I break 4 more spokes in the course of 25 miles (again Ward heroically repairs them for me using his 15 years as a bike mechanic!).

(for this part of this stage of the trip I’ve been riding with the lovely Ward and Jacky, on the road for 2 years with 1 more year to go!)

Attempts whilst at a ‘pull-in’ by the roadside to reposition more weight to the front wheel (swapping panniers around and re-packing) and (at slight risk, but I have purification stuff so can drink from streams) jettison some of the water I am carrying are to no avail when the 6th spoke breaks after a 100 or so metres.  We’re 150 miles past the last bike shop with at least 400 miles to the next one.  The reader can here enter their favourite expletive for emphasis 🙂  I have a feeling akin to that I encountered on the Dalton when my stove broke but whereas I was able to manage (!) with no stove for that stretch, its sort of difficult to ride a bicycle with one wheel missing!

(cue jokes about “Now come on Jon, you could surely do a ‘wheelie’ the whole way!?” well, actually, it would have to be an ‘endo’ – with rear in the air – and, spookily, there are no pedals on the front wheel so going anything other than downhill would be a mite tricky…! so, na-na-na-na-nah! sorry, but someone is bound to say it!)

In the last big town (Whitehorse) we’d noticed that my rear rim was cracked – I was running Mavic 717s with 32 spokes which are race rims and which I now realise would be ok for short-term touring but more intense long-term expedition-type touring really warrant at least 36 spokes and beefier rims.  Essentially I was trying (and astonishingly, succeeded for a long time) to do the equivalent of an off-road car Rally, utilising a large ‘roof-rack’ to carry a small horse, with Lamborghini alloys!

The wheel had been previously rebuilt (ref previous Tweet) with a new tougher rim in Whitehorse (still 32 spokes) but for some reason (too many Buffalo Burgers in my belly no doubt) was ok for a only a few days with the combination of my weight and the potted road surfaces, so the pings, agonisingly, began and kept coming.  Where I now think I was carrying 210 plus at least 180 lbs on the Dalton I’m now carrying maybe 210 (me) plus 140 lbs which is still pretty huge.

Decision.  Agggh!  6 spokes down and we knew it was going to keep happening.  We were running out of spare spokes.  Even if I could make it the 50 or so miles to the next town, Watson Lake, they had no bike shop.

I thought briefly about going back (to Whitehorse) but my mind told me that in this situation its best to go forwards.  It took 2 minutes of discussion.  I knew what I had to do.  Thumb out…and the FIRST vehicle actually stopped!  And it was a huge semi-articulated rig with empty trailer!  Thank you ‘A’! (the rig drivers aren’t allowed to take hitchhikers, hence the use of only an initial, but in his words “Man this is tough country and there is no way I’m gonna leave a guy standing by the road out there”). 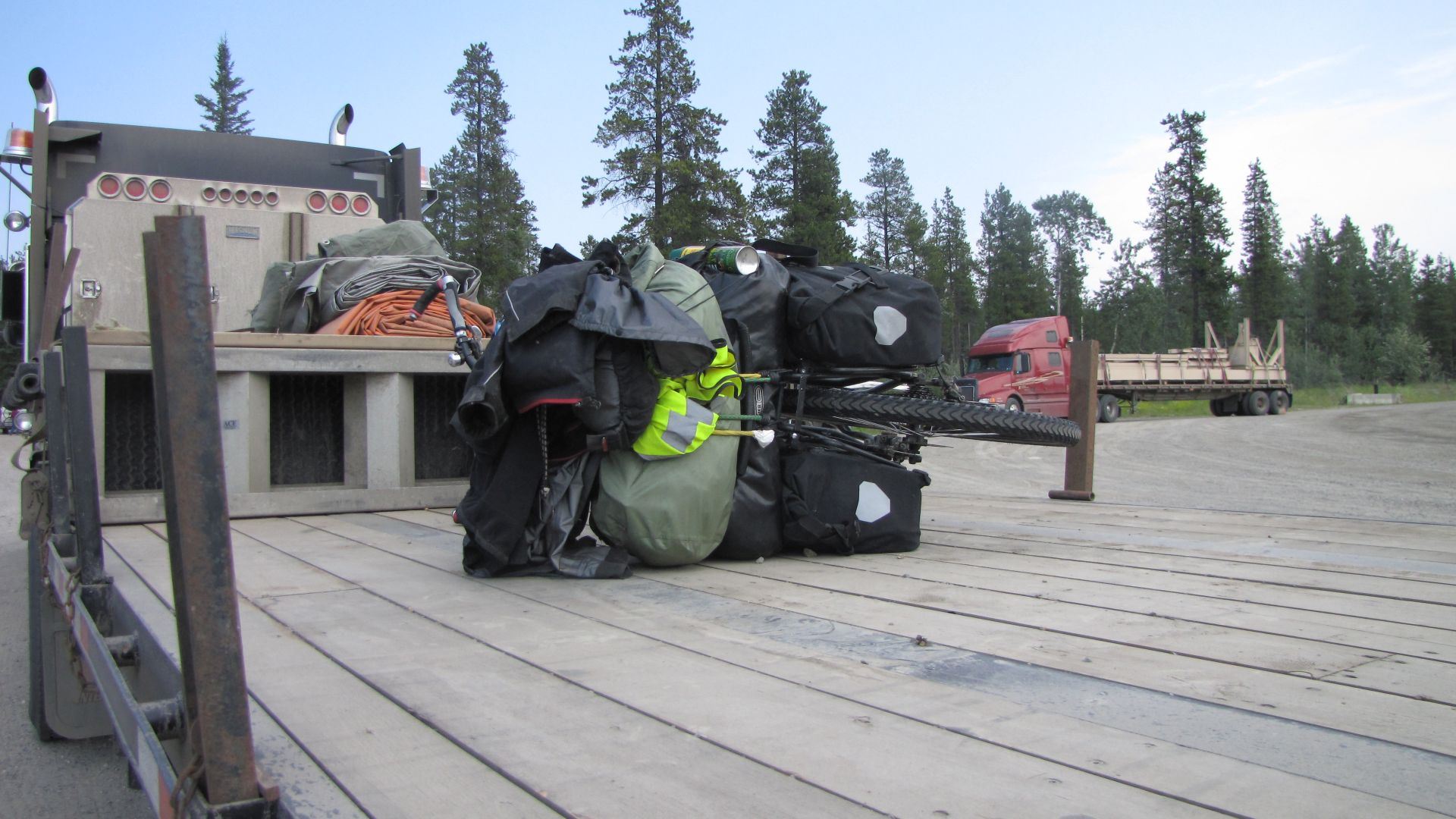 The whole bike, fully laden (well done Charles, it must have been a bit scary) was strapped to the back of the trailer…with just one (BIG!) strap.  It held.  For 50 miles.  And ‘A’ even stopped to allow me to check my notes for the location of the campsite!  I was hugely disappointed to be off the bike and very jealous of the guys when they rode into camp later that day, but as my dad says, the delays make the journey 🙂 …

As soon as I got to a phone I rang iCycle in Whitehorse (thank you so much Jonah for your help), ‘spec-ed’ out what I wanted and ordered TWO (front  and rear) new 36 spoke wheels made by Sun, the model called the Rhyno!  Jonah built the wheels that afternoon (a 2-3 hour job) and got them on the next Greyhound Bus to Watson Lake.  Amazing.  I picked them up the next evening from the bus station 2 miles down the road, borrowing Ward’s bike to do so – believe me, carrying 2 wheels in a box on potholed roads with one hand on the handlebars and the other on the box, with no straps, was a bit hairy!  Ward and Jacky couldn’t stop laughing when I pulled into camp…”How..? What…? Let me get my camera!”.

(they also stayed the extra night which was fantastic and meant, all being well we could continue together on the road the next day)

After some Kinesiology in a pimped-out RV (read: ‘large luxury bus’) from a 15 year old prodigy – as you do – Ward and I worked into the early hours fitting wheels, adjusting brakes and then I went for a road test at 1 am.  No pings…please!

Its been nearly 2 weeks in which time Charles and I have ridden over 600 miles.  So far so good. 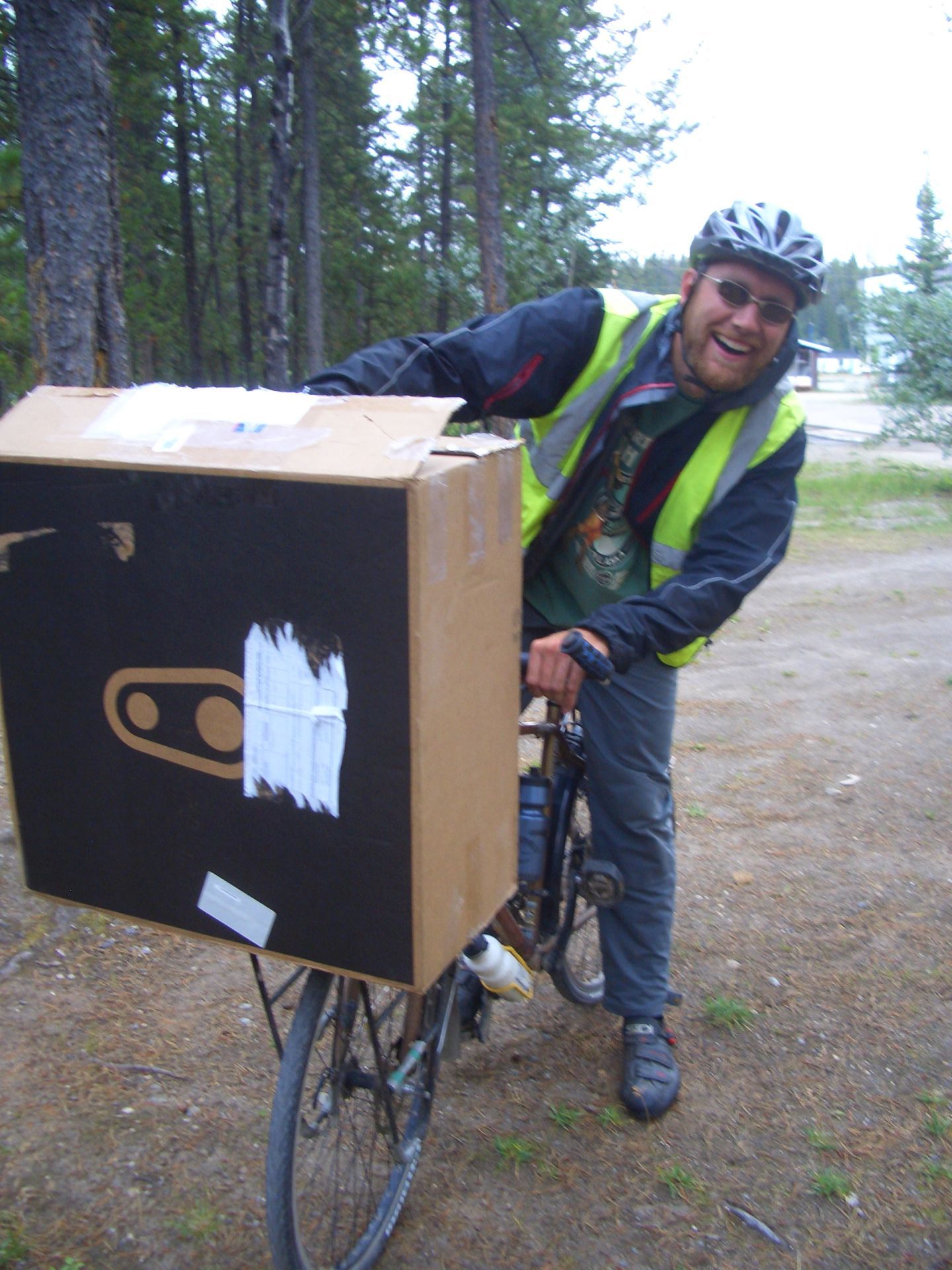 Watson Lake, YT, Canada – Me on Ward’s bike having just picked up 2 new wheels (in box) from bus station 2 miles up road…did well not to crash on way back I thought! (pic courtesy of the Budwegs)

And do you know, the best thing to come out of this was that I simply did not hesitate when by the roadside making that decision: there was no way I would fail to get on the road again, I would do what it took, and quite frankly, that’s pretty cool I think (bearing in mind that I’ve felt my motivation waver many times – as I’m sure it will in future too!).

In just over 2 weeks Ward, Jacky & I have covered nearly 800 miles which with the hills, heat (regularly in the high 30s °C) and on many days headwinds is astonishing.  As mentioned in a previous Tweet referencing ace world record holder Mark Beaumont it was even more challenging when one considers that it was common to have stretches of 150 miles at a time with no facilities whatsoever, no homes, no outhouses, just the occasional litter bin (oooh, excitement!).  Its a sad state of affairs as we’ve seen dozens of (what were already very dispersed) abandoned homes, restaurants, motels and campgrounds.  Times are tough in the world and whilst I’ve worked very hard to be able to be here, doing this, I know I’m also very privileged and fortunate.

We’ve seen wildlife like you wouldn’t believe with 3 bears in 1 day and herds of Dall Sheep and Bison in abundance – my 1st Black Bear was about 20 feet away, crossing the road in front of me which was, as before, the most surreal experience, as I said ‘Hello Bear’ (Park Service guidance!) he stopped and looked quizzically at me before bounding off into the trees.  Liard Hot Springs were also lurrrrvvvlllly!

We’ve camped every night and I haven’t slept in a bed for over a month now, often we’re wild camping as there is no other option.  Charles has his new wheels (heavy!), bar-ends, additional bottle cages (6!) and my stove is now working through the use of a bottle cap and some wire (thanks Adam and Ward!).  I’ve also had to swap my Exped mattress for a Thermarest as the Exped valve just didn’t stand up to the task (great for super extreme occasional expeditions but not in my experience for long-haul).

I’m NOT losing weight which is bonkers.  My legs feel like pistons but they do get tired eventually – with the guys we’ve been regularly doing 75 mile days and sometimes 80s and once a 90!  I can pull on the hills but am starting to think I need to modify my riding style a little as I’m pretty heavy and with the length of my thighs can get a lot of torque on the pedals which is ok every now and then but I’ll thrash components if I’m not careful.  That said, stuff just wears out, ‘no two ways about it’.  My rear tyre is getting bald after nearly 2,000 miles and whilst the wheels should be good for a while they will ‘go’ at some point. 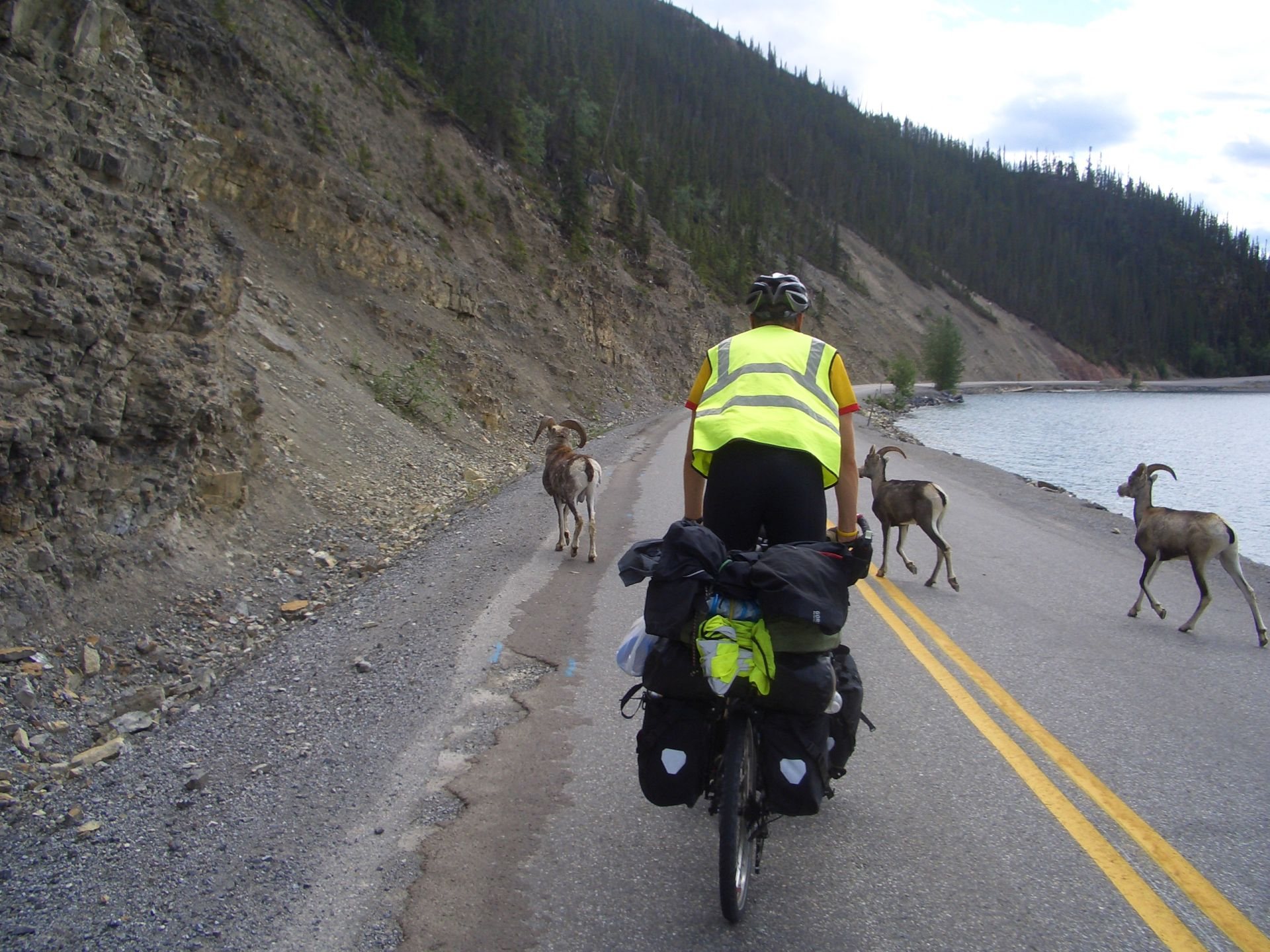 Nr Toad River, YT, Canada – no, look at the sheep not my posterior!

And – bar the 50 miles mentioned above – I’ve cycled the whole of the Alaskan Highway from Delta Junction, Alaska, USA to Dawson Creek, British Columbia, Canada!  AND, gone through 2,000 cumulative miles!

Just a quick comment about road safety in Canada – 90% of drivers have been great but every now and then you get some loony tune who either has no clue they’re so close or they totally know and are trying to make a point.  Basically, the law of the jungle says I have to heed (of course) but often I’ve got nowhere else to go, where I’m already pulled far-right.  I need to continue to de-risk the situation and certainly avoid confrontation.

It was 38°C yesterday, the hottest in which I’ve ever ridden.  Today its 42°C!  I’m having a day off!  For 6 weeks the daytime temperature hasn’t dropped below 30°C.  Amazing.  And I’m in northern Canada!

I said a sorry farewell to Ward and Jacky today – its been a great few weeks and I’m sure we’ll meet again (Phil, Dave et al: I want to show Ward Afan’s trails).

Next steps for me: Jasper and the Icefields Parkway.  Woooohooooo!

Thank you everyone for your kind comments and continued support 🙂