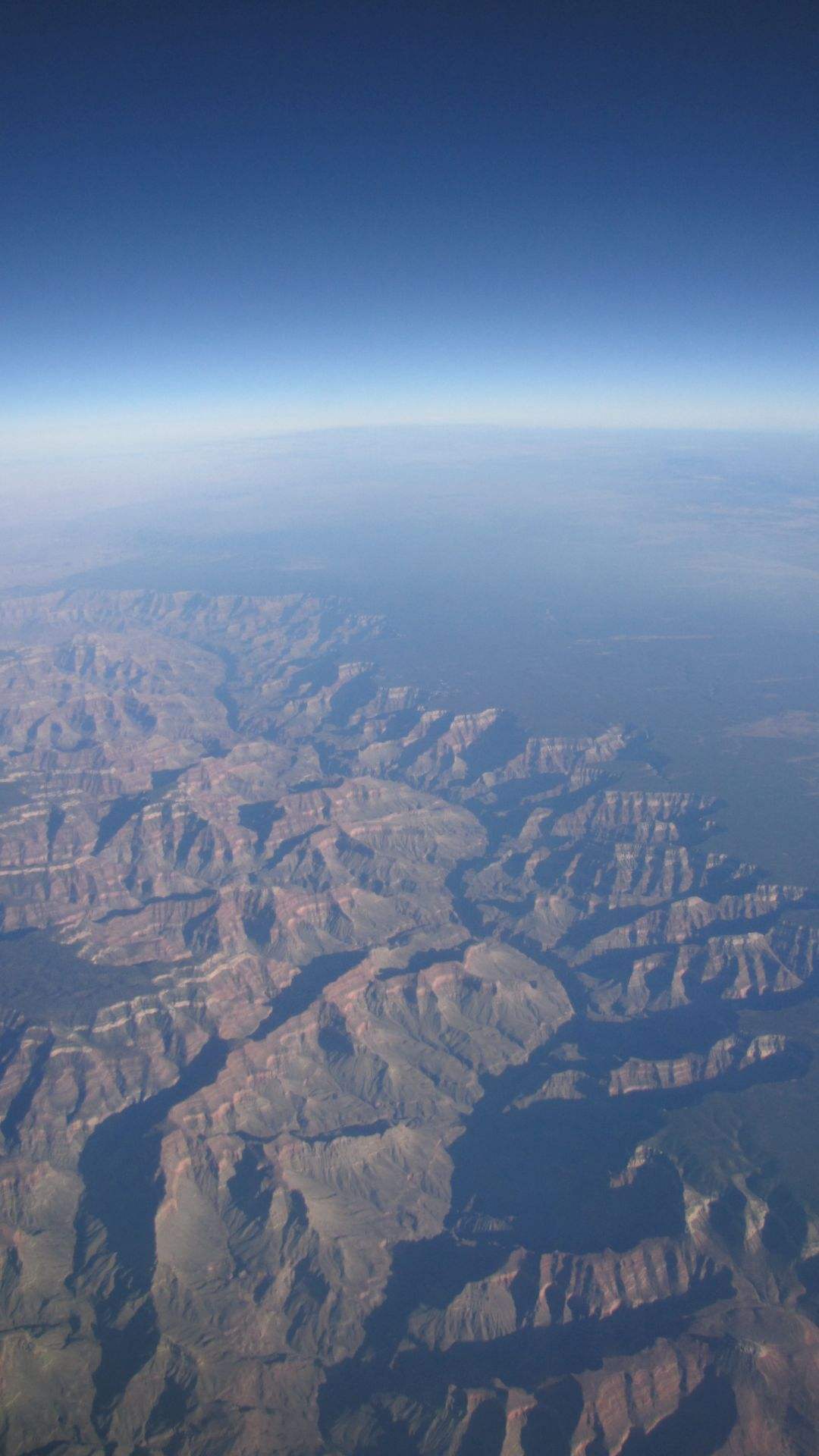 Yes, I am 5 years old, taking pictures from the plane to LA (oooh look, you can see the curve of the earth!)

“Where’s my gin!” we’d mockingly imagine her adding after she’d ordered us to “Keep left on highway 270” in her slurred, robotised voice.  I’m driving, near Denver with Jeff, a long time friend from Milwaukee and we’ve just switched on the GPS unit that came with his hire car – we decided we got a bit of a dud since the unit’s ‘voice’ always seemed distorted at first but improved later (after she’d had some gin, we teased).

(on later occasions ‘she’ would go completely silent despite frequent and complex intersections as a result of which we’d joke that she’d ‘gone for a bit of a lie down’ not before telling us “you know where your going, just look at the pictures”)

Not since June had I taken any real break from the cycling – aside from a few days here and there at campsites – so I was very much looking forward to 10 days off the bike in Denver with Ethan, April, Gage, Elise, Jeff and Catey, relaxing, catching-up and exploring the more far-flung bits of Colorado.  Just prior to this I’d found myself slightly ahead of schedule so took the opportunity to visit (for the first time in 10 years) David and family for a few days in Westlake Village near LA, CA, taking advantage of cheap flights from Denver.

Ah, the sea, the sea, the sea.  How I love the sea – I’d not seen it since mid-June (which was over 4 months past at this point).  Thank you so much David for taking me to the beach, not just once but twice in my 3 days in CA so we could jump waves (in between the odd ‘face-plant’ on my part!).  And to go there by open-top Mustang was also pretty cool!  I chill, meet their extended family and am treated royally.  Basking in the warm summer evenings, top down, listening to Deadmau5’s (mesmeric) ‘I Remember’ was sublime.  And to top it all I get to watch a film at ‘Grauman’s Chinese Theatre’ in Hollywood, the one where many of the US film premieres take place (I just know I had Nicole Kidman’s seat). 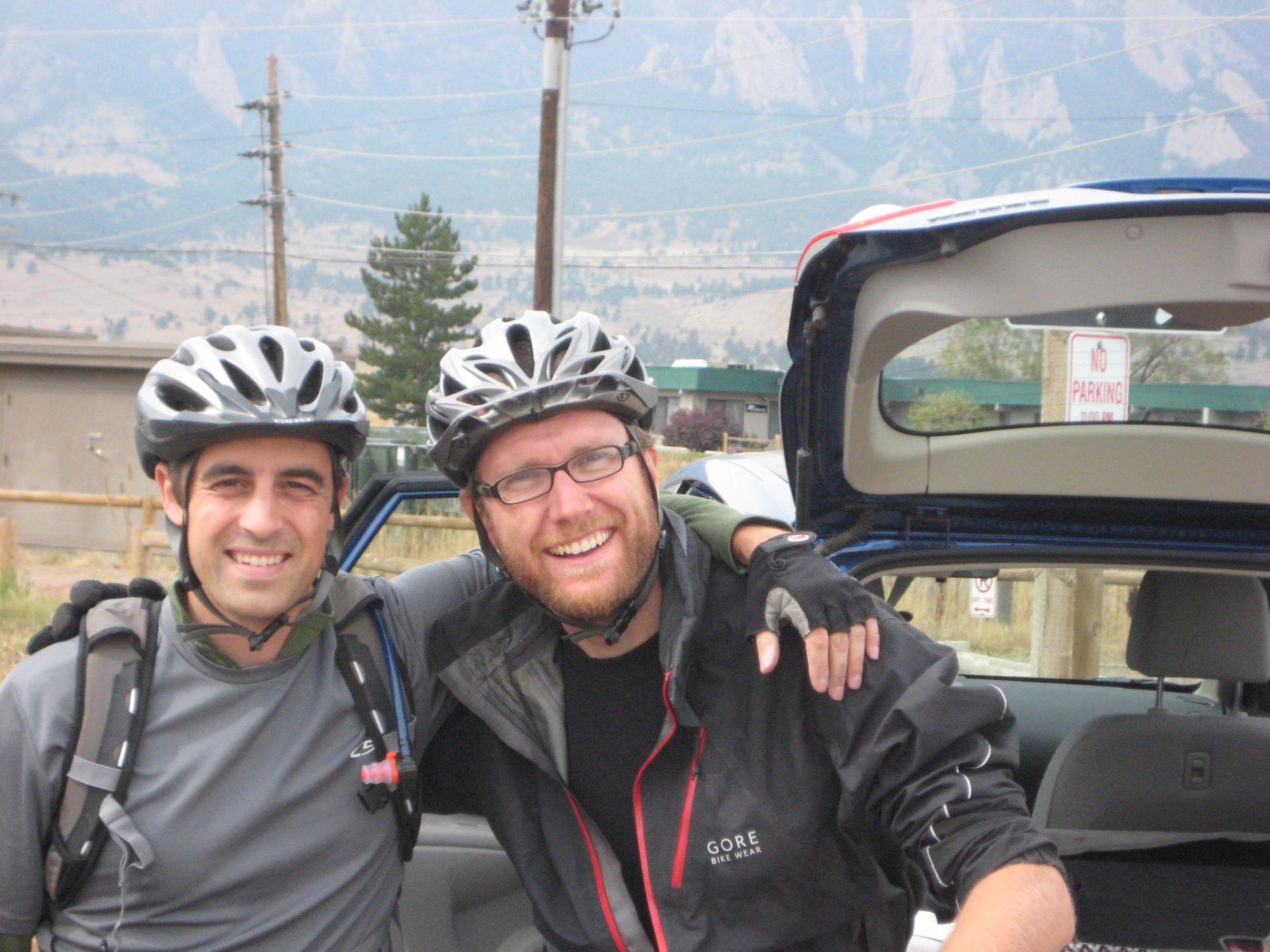 Nr Boulder, CO, USA – Just about to set out Mountain Biking with Ethan & Jeff (yes, I know, I was meant to be having a rest from the biking!)

“Do you want to go Mountain Biking” Ethan asked.  “Absolutely” I said, oblivious to the fact that this was meant to be a ‘break from the cycling’…well, it was Colorado and we did go to Boulder and I hadn’t ridden anything with suspension for months and months, so how could I refuse?  Jeff, trooper that he is still came even though he’d been up at 4am to do a charity run.  Great route Ethan, allowing for total abandonment on the downhills and some nice technical stuff although I was a bit rusty – I felt like I was hurtling down some Welsh descents that I know, except the hills were a bit (ooh, maybe 4 times!!!!) higher.

You know you’re getting older when a DJ of your ‘yoof’ is now seen as ‘retro’.  LTJ Bukem and MC Conrad, who I’d never had the chance to see previously were playing at the Fox Theatre, Boulder.  Drum ‘n’ Bass mayhem ensues and Jeff, bless, had his eyes opened to something new.  For a moment I was 19 years old again although we did make it home before 2am and coco may have been involved before bedtime. 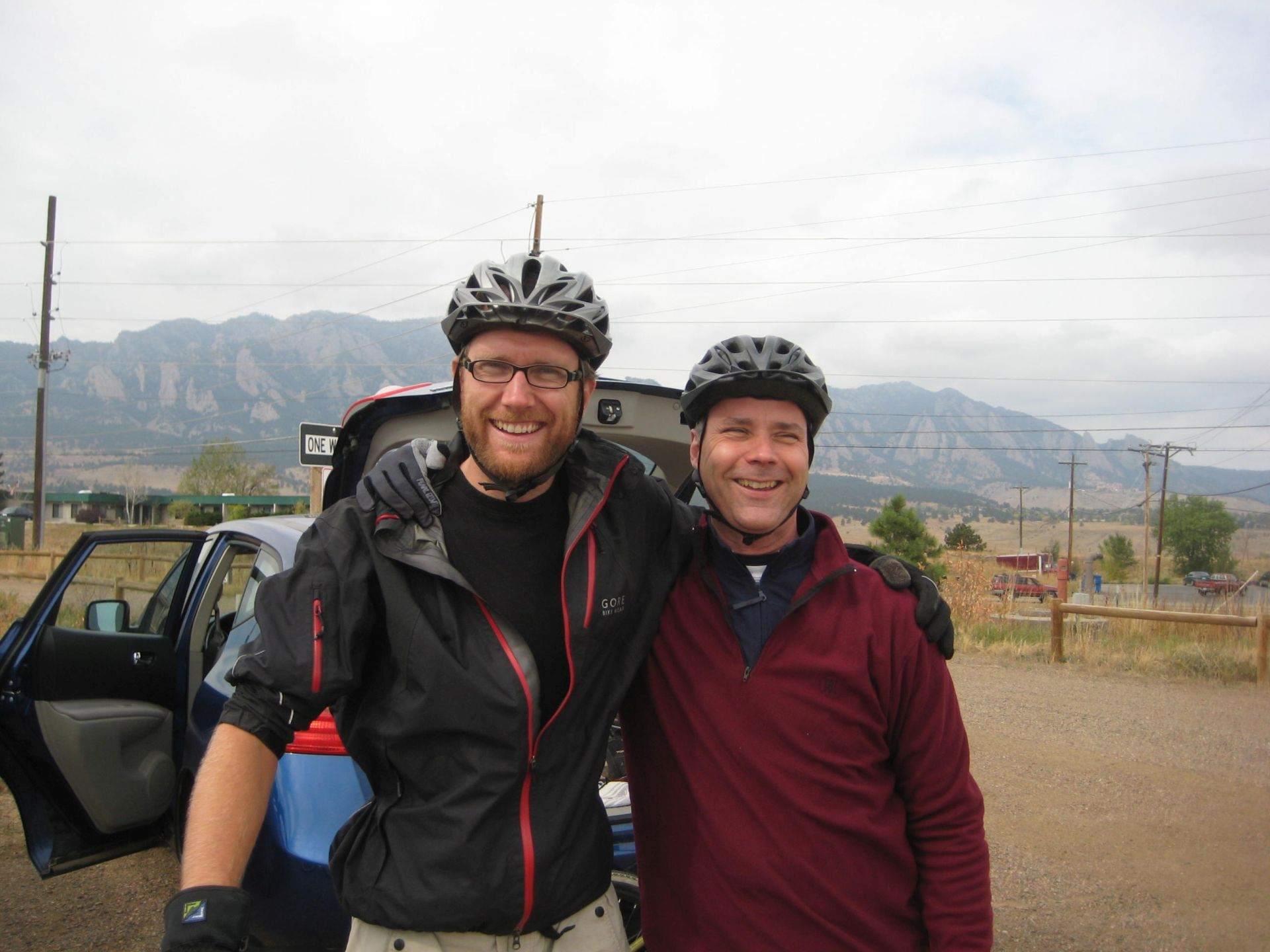 Nr Boulder, CO, USA – Jeff, ready to get on his lurvly loan bike!

There was a lot of laughter, ‘Wii-jinx’, the discovery of ‘Guitar Hero’ (OMG that can be a fantastic game), lovely meals, chats, not to mention hiking trips up into the fabulous ‘Rocky Mountain National Park’ and around Colorado Springs with Jeff and Catey where we saw some great Elk-shenanigans (well, it was the time of year…).  I was introduced to some lovely ‘friends of friends’ (thanks Catey – hi to Jackie and Josh and thanks again for the cycling gear! – and Ethan and April).  And of course there was the lovely and hysterical moment when 3 year old Gage told mum (April) to ‘not let kitty out’ because he would ‘eat the pumpkin’ that they’d just bought in preparation for Halloween (ooh those cats they love their pumpkins!).  I also slept in a bed and had an en suite bathroom which was wonderful – could I tow a chemical toilet / port-a-potty behind Charles?

Well rested I then took a deep breath and headed up into the highest mountains in the ‘lower 48’, the Colorado Rockies, where snow was a real possibility as the not-so-subtle embrace of autumn / fall closed-in … more of this later.  Take care all.