Our trip began on a sunny Saturday in May 2014 in the town of Conwy after a lengthy railway journey with our mountain bikes and kit, the latter being contained entirely in our 20-litre backpacks. Our rail journey hadn’t started well after we were told “No bikes on this train, we’re full!” though luckily I had pre-booked a space for our bikes as well as us so our jobsworth conductor had to relent. Conwy is a pretty town, with a castle near which we had a pre-ride curry (vital) in a local tavern and Paul was served beer by a barman with a very impressive handlebar moustache. Our B&B was a lovely place with views toward Snowdonia National Park. 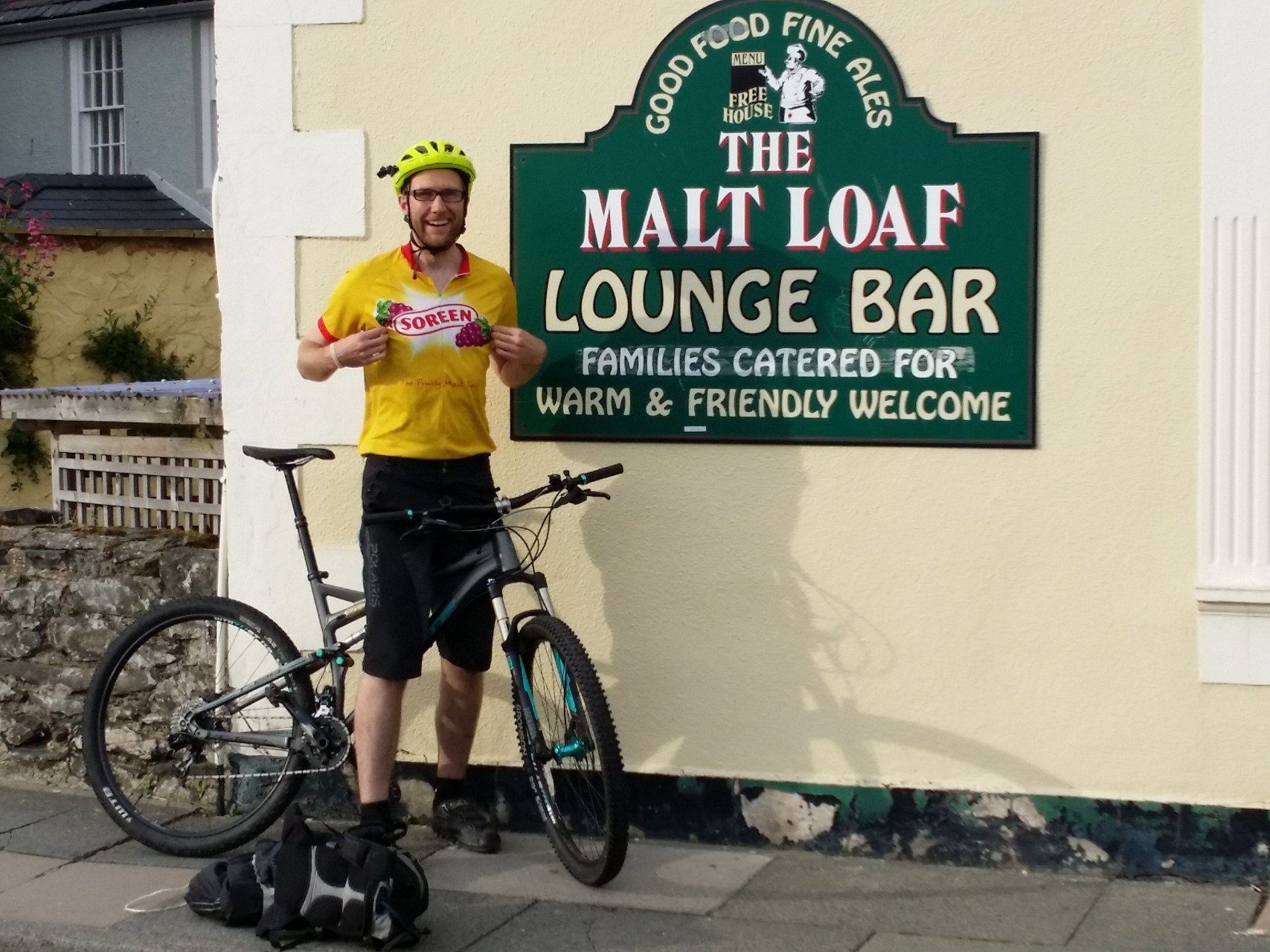 After a sunny start we begin climbing a very steep, long paved single track road in order to get us up in to Snowdonia … gosh it’s a slog! As I got to grips with a different set of gear ratios on what was a loan bike which I’d only ridden round a car-park (the servicing of mine was delayed so at the last minute the bike shop lent me a new Whyte T-129 S) we make it to to Coedty Reservoir near Dolgarrog and begin our first off-road section, with angry grey clouds beginning to amass above us. And then, the heavens open. And the gale force headwind starts. As we ride beside the Llyn Colwyd reservoir beneath impressive cliffs of browning bracken-coated grey rock it’s a struggle to keep the bikes upright or make any forward progress. Horizontal rain smashes into our faces, stinging with an appalling ferocity. This is brutal! The riding is at times technical with rock gaps and loose boulders to negotiate and I lose track of the number of times I’m blown off my bike as I attempt, in vain, to slow the bike, balance my weight and manoeuvre around the various obstacles. 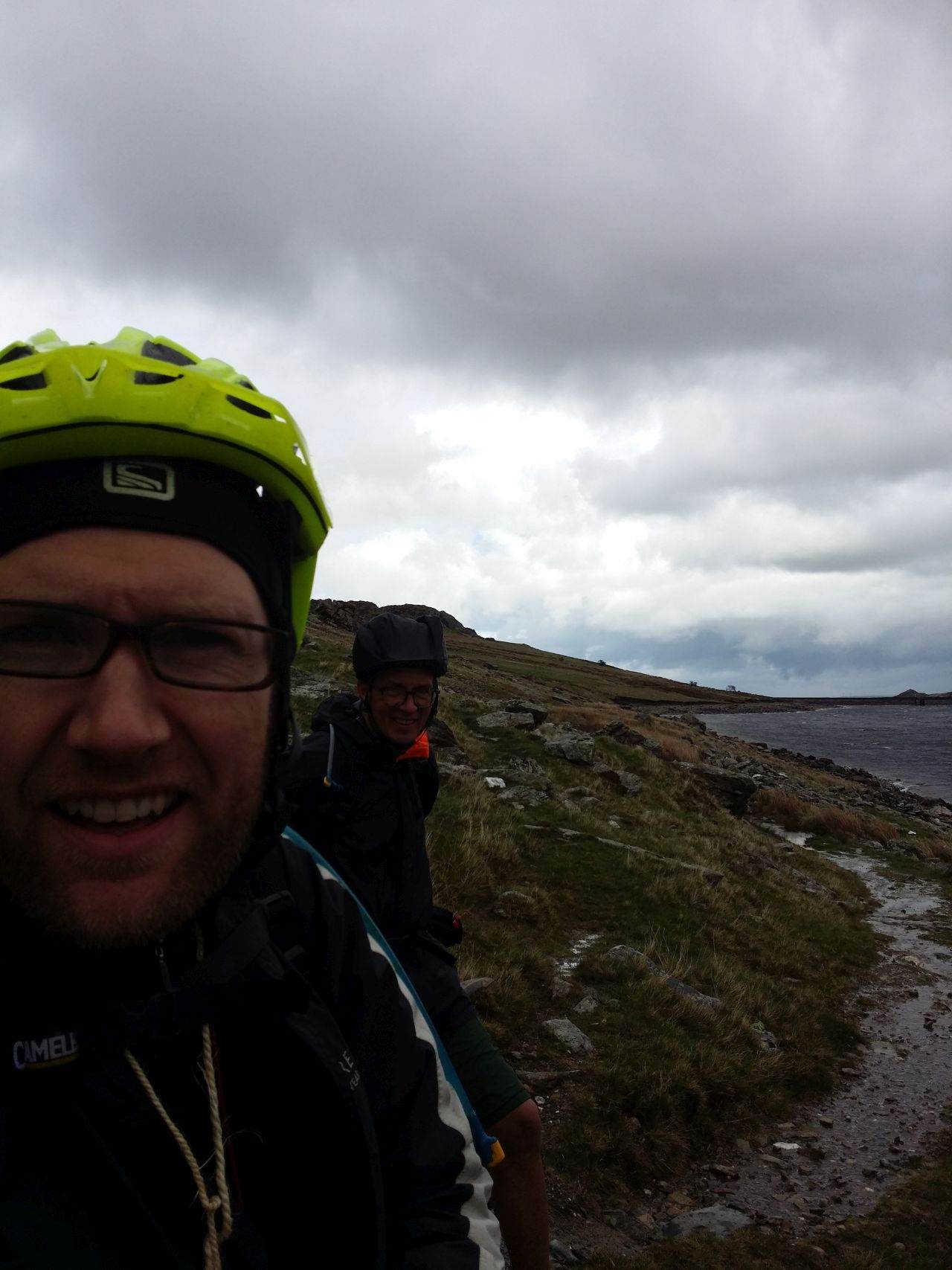 Mercifully we find a derelict barn in which to shelter from the onslaught. Eating lunch I start to get very cold and I begin to shiver … I’ve been in this situation before and know I need to act quickly for I’m wet through and getting dangerously cold. I put on every bit of clothing I have (not much … note the mention of 20 litre rucksacks above!) and thankfully, after a bit of foot-stomping to get the blood pumping, I’m fixed. And then, after a push up to the saddled snout at the foot of the reservoir, we begin a mind-blowing descent in the face of the full force of the frontal assault from the wind and rain, through deep peat hags, somehow hopping the bikes as we ride over the wet peat sections in order to keep moving. It’s utterly fantastic and stupendously exhilarating and topped off by our first (small) river fording. Just an hour before I had been shivering uncontrollably and wondering what on earth I was doing here!

Having been delayed a fair bit due to the conditions we choose to forego two further off-road climbs up and over Cen Glas and Bwlch y Groes, opting instead for a road route via Betwys-y-Coed to our destination for the night at Penmachno … though not before stopping for a pub dinner in Betwys-y-Coed. I also took the chance to buy a new Camelbak bladder after problems with mine meant I had to switch to two plastic milk bottles lashed to my rucksack! A big day and suitably fitting for it was also my birthday. That night our room resembles a Chinese laundry, with wet clothing strung from every possible hook-like object … including the lampshade on the ceiling!