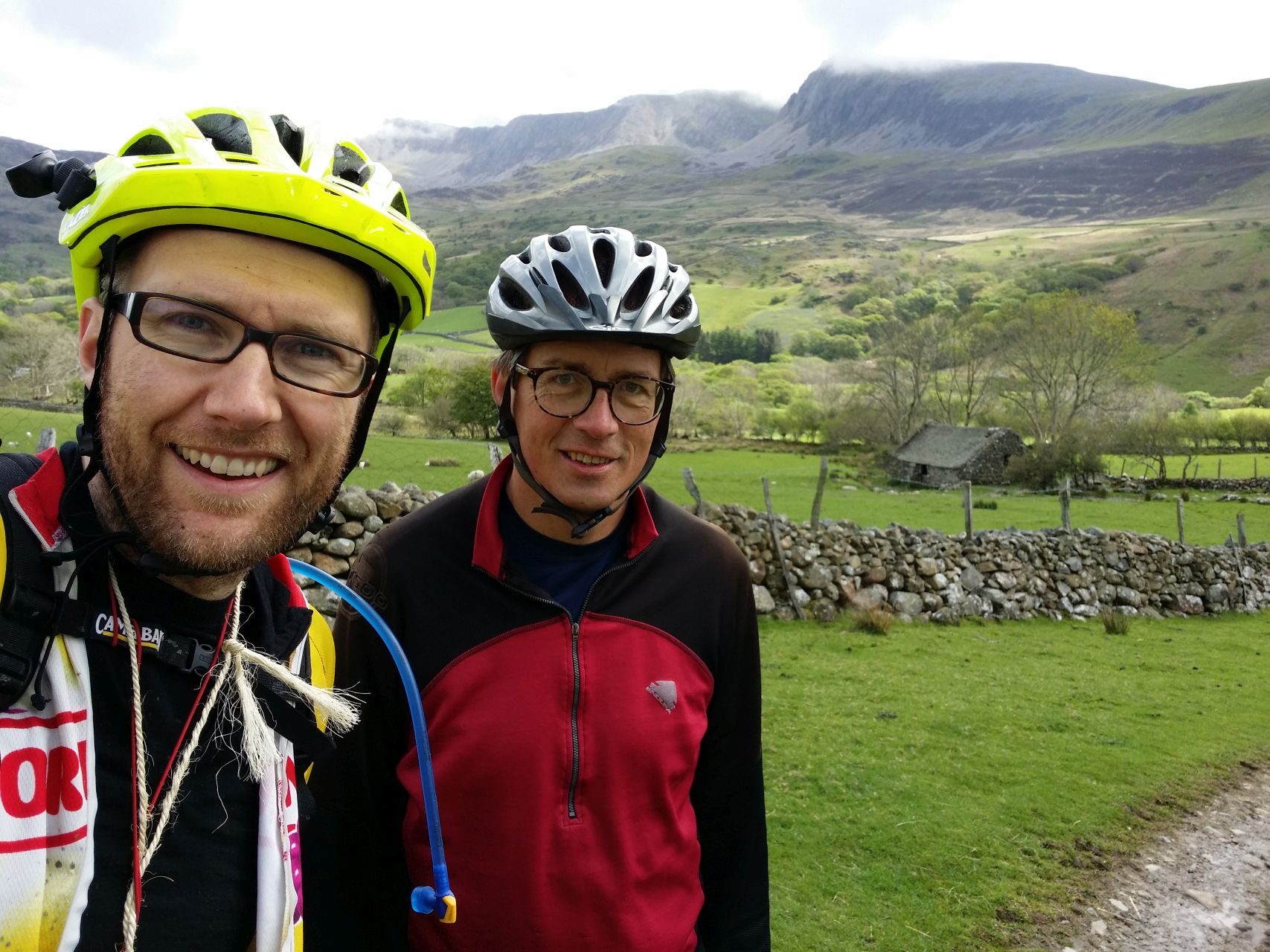 That morning we load up on extra toast from breakfast, spreading it with a healthy dollop of jam and squirrelling it away under the table ready for lunch later. There was no shop nearby – not being too enamoured with the prospect of just cold toast for lunch, once under way we even stopped at a farm to see if they could sell us some food but to no avail. We decided to take a detour in to Dolgellau to find a shop. When we arrive I’m transfixed by the reams of food available in what is a fairly sizeable supermarket called Eurospar. Paul, ever the thrift-king spends a time seeking out the pasties and such like which are reduced to rock bottom prices due to their sell by date. Now fully stocked for lunch we set off into a dry but overcast day, only to find that Paul’s suspension bushings are creaking. On inspection there is play in the suspension which shouldn’t be there and could, if not addressed, lead to the bike becoming unrideable. Before we left for the trip he’d serviced the entire bike but had thought he had plenty of life left in the bushings. We ring the bike shops in the vicinity but none can help … so we decide to push in and keep an eye on the misbehaving bushings. 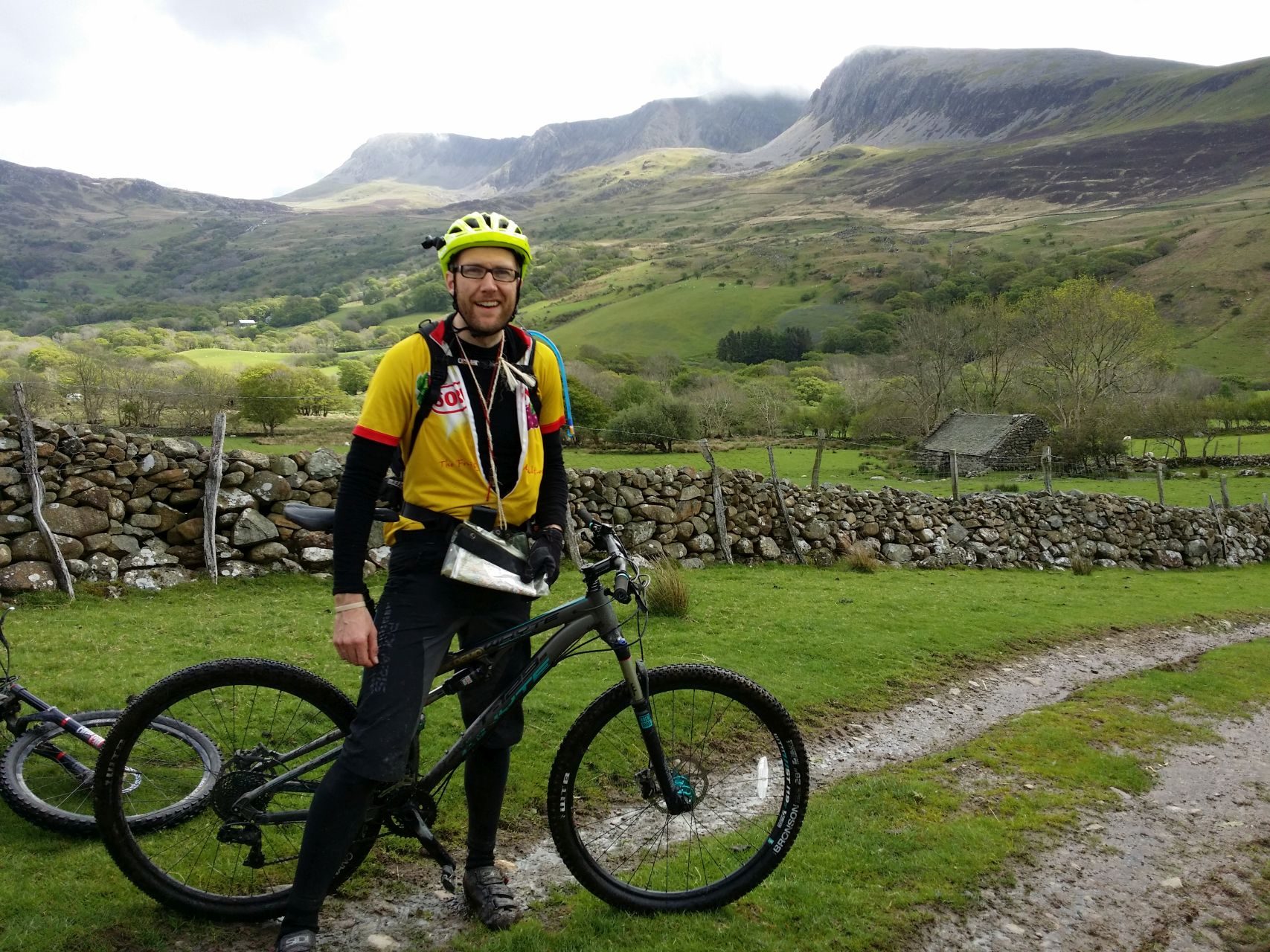 After making our way along the Affon Mawddach estuary we climb sharply up on tarmac to the lower slopes of one of Wales’ highest peaks, Cadair Idris. Heading west, we’re treated to great views as we traverse above the estuary with the hulking grey buttressed ridge of the Cadair Idris massif to our left. Climbing steadily we hit gravel, some nice flowing doubletrack descents and the occasional bit of single track too. After a small navigation error we re-track slightly, passing a ruined house festooned with ivy. Up ahead a lamb follows us through a gate, appearing from nowhere and we spend time chasing it back through the gate to be reunited with a bleeting mum. Suffice to say that the theme tune to Benny Hill would have been appropriate for the chase, for the lamb was literally running rings around us most of the time! In the village of Bryncrug I buy a pint of milk from the shop and it comes in a glass bottle, the likes of which I haven’t seen for years following the demise of milk deliveries in much of the UK. We’re waaay out in rural west Wales and things feel different here, more local, more traditional. 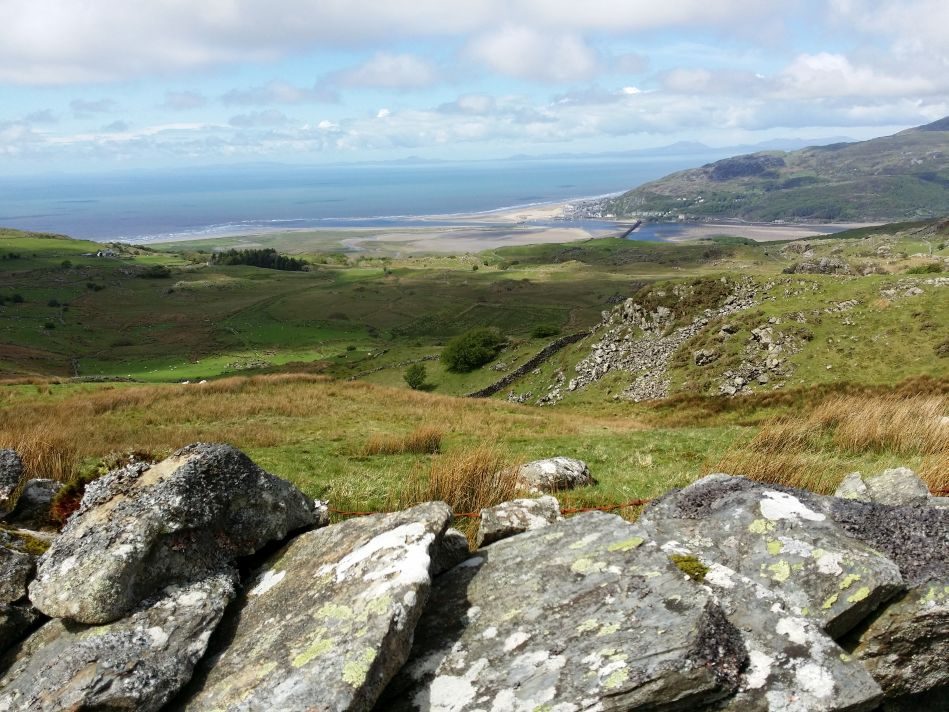 Leaving town we climb up on gravel tracks, interspersed with tricky slabs of rock, often wet and which require a balance of deft and measured power input to clear. It’s exhilarating stuff once again, and the descent off the top of Bryn Dinas is a corker with slab drop-offs aplenty. At the bottom we both realise that we’ve accidentally done the entire 2 hour off-road section from Bryncrug with our suspension locked out! Old Skool. On the way in to Machynlleth we’re met by a self-confessed Gypsy who asks if we have the tools to repair his ailing bike. On inspection we don’t, and ask if there’s a bike shop in town. It used to have a couple but according to him has now become a ghost town in that respect. Once something of a mecca for mountain bikers it has apparently lost out to the formal Forestry Commission trail centres of Coed-y-Brenin to the north (from where we’d come) and Bwlch Nant yr Arian to to south (where we were heading tomorrow). That night we get a chance to wash the bikes which is much needed for they look like they’ve both been immersed in a bog. Thankfully Paul’s bushings (on his bike!) have held up too. And, I think there’s a trend developing here: another, great, day 🙂