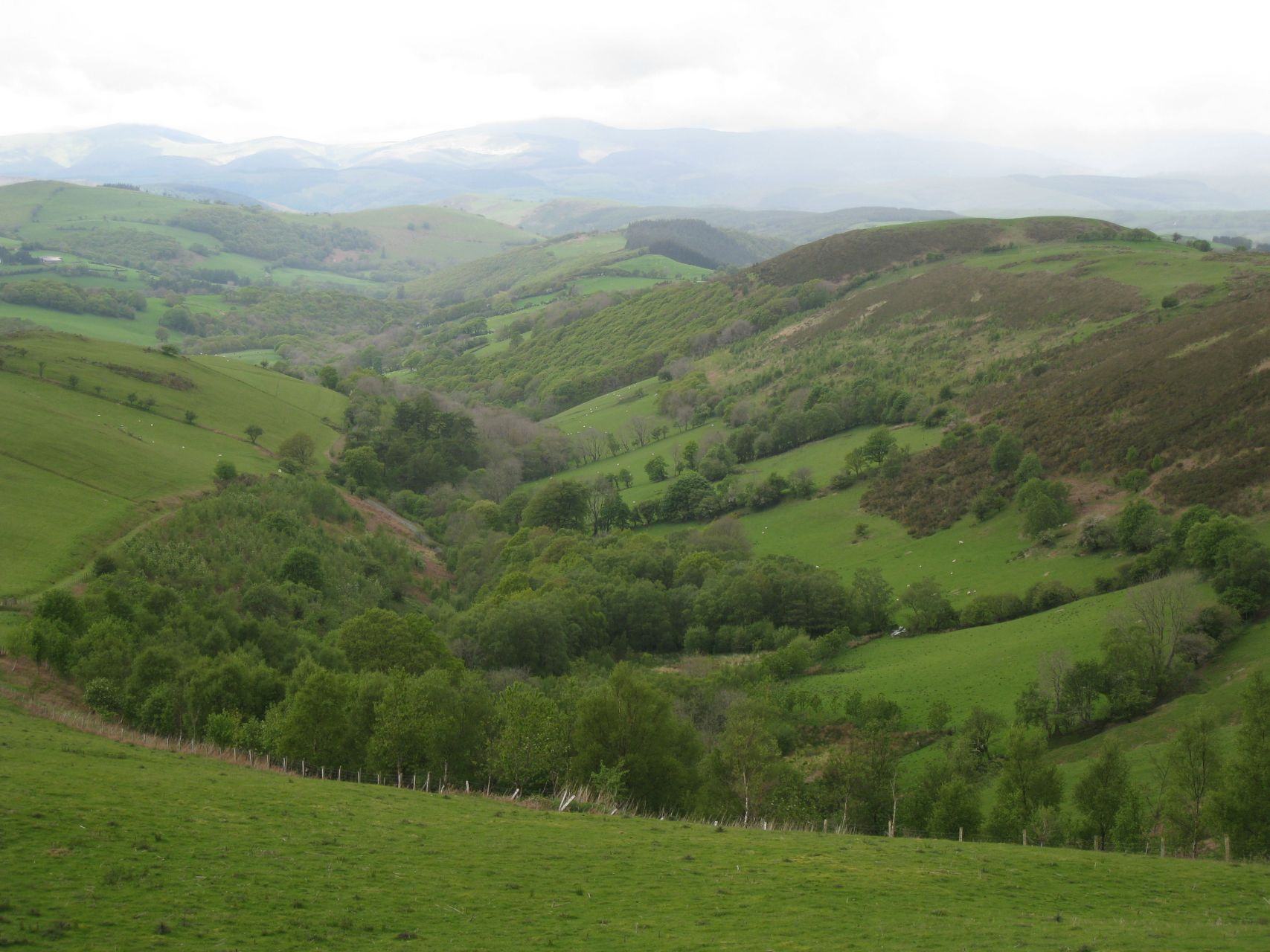 After a lovely cooked breakfast with home-made bread we set off along the Afon Dulas valley, climbing gently on tarmac. It’s not long before we’re climbing more sharply, on gravel and then grass and finally more gravel toward the top of Foel Fadian. The climb is monumentally steep in places and toward the top we’re pushing for part of it – if my life depended on it I might have cleaned more of it but as it was we had a long way to go. As we head toward the Afon Hengwym valley the trail becomes somewhat intermittent and we’re on a compass bearing at times, intently checking the map when we stop. It’s satisfying, bush-whacking-style riding as we hop around rocks, attempt to power through bogs as our wheels sink above the drive-trains and occasionally have to man-handle bikes up shallow but steep ravines. 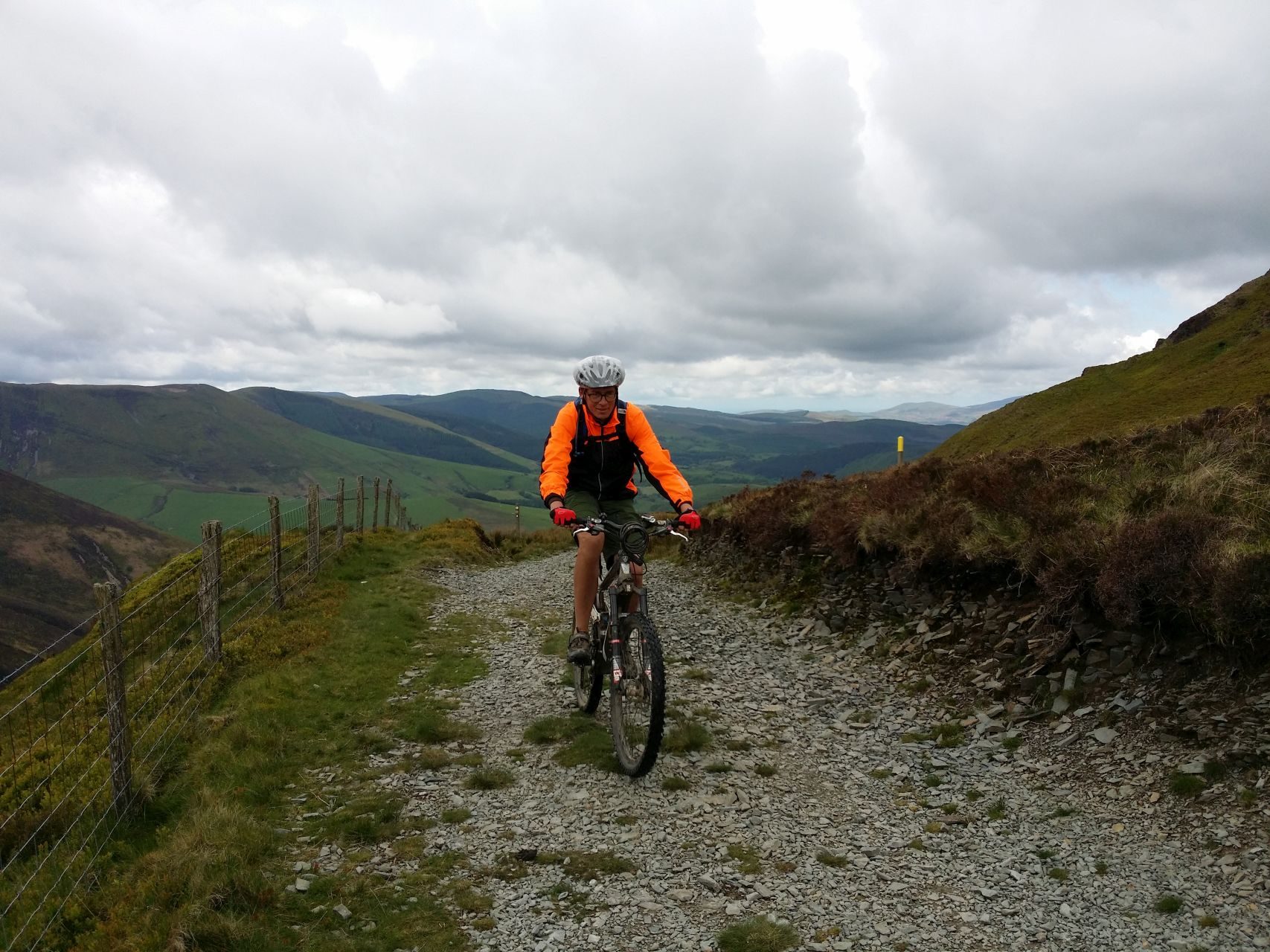 Day 4 – Paul riding up beneath slopes of Foel Fadian

Following as we are an established route (or so we thought …) we ford the river as instructed, carrying bikes on our shoulders to do so, the cold swift-flowing waters dragging at our legs. At this point the path becomes very indistinct and our progress slows dramatically. The map says there’s a bridleway here but we certainly didn’t find one that looked like it had been used for a long time. We trudge on, pushing bikes across what feels more like a swamp. Eventually we make it to gravel but it’s getting late, such was the delay. In an attempt to make up time we put the hammer down on the tarmac toward the Bwlch Nant yr Arian trail centre and then do the same over the gravel through the trail centre – we risk losing the light if we don’t keep moving. At the Nantyrarian viewpoint we take the obligatory tourist shot of each other sitting in the giant wooden chair soaking up the fantastic view in what is now blazing sunshine. Aside from the occasional road cyclist, we meet our first biker here. A combination of poor weather and remoteness must have kept others away from much of our route until now. 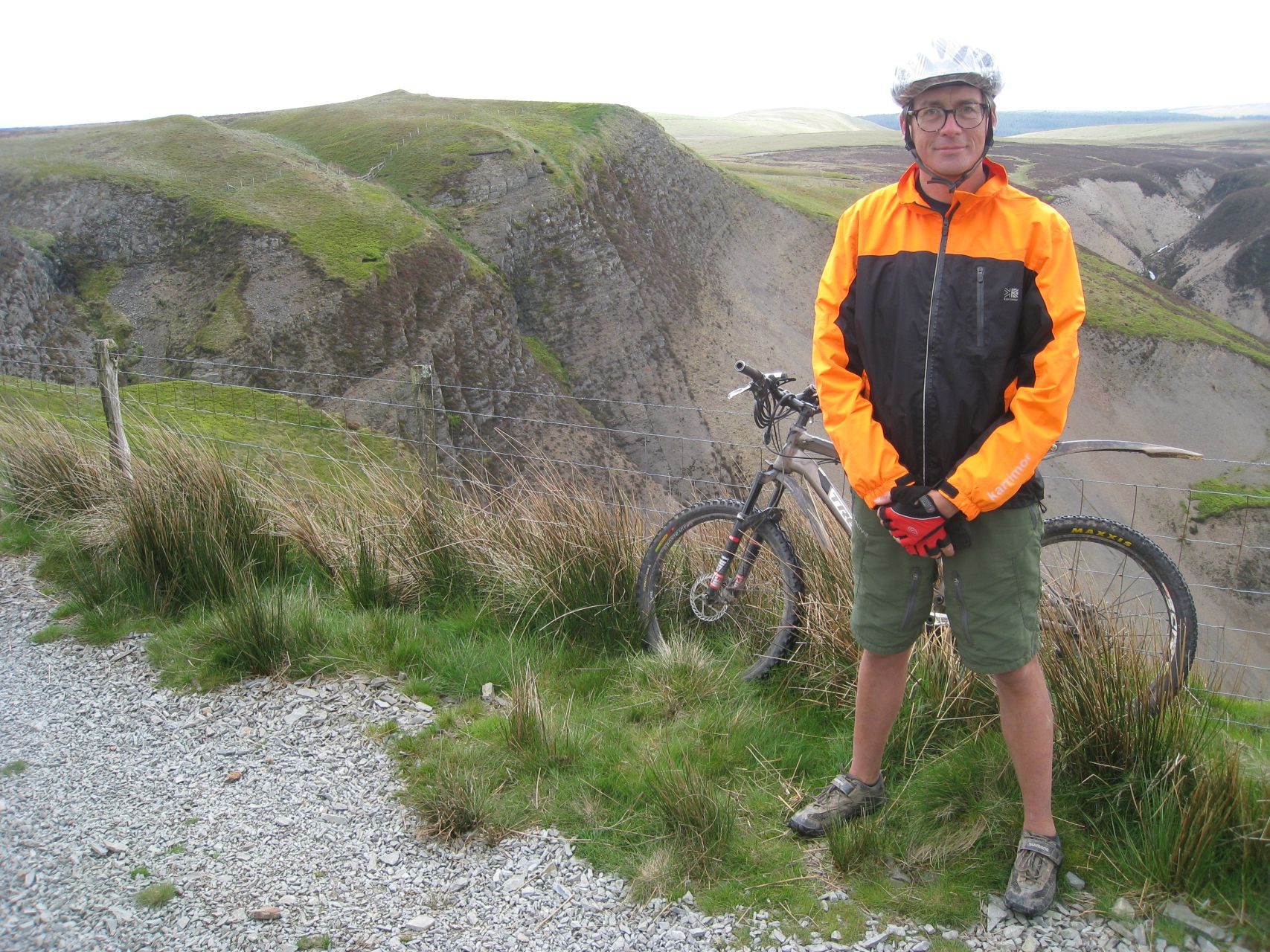 We still have a fair way to go so we push onwards, dropping down and then up and over the upper flanks of Ffynnon Wen before dropping down again, this time losing height sharply through woods, to make it to the Afon Rheidol valley. It’s at this point that bravado gets the better of me as I try to ford the river whilst riding but lose my wheel to the current, promptly falling off much to Paul’s amusement! Finally, having rung ahead when we had coverage at the top of Nantyrarian we make it at around 9pm, just as the sun disappears entirely, to our hotel for the night. They’d kept the kitchen open just for us. After a long day we devour everything on the table and crash out, knackered, in what is a pretty spectacular setting atop the famous waterfalls.