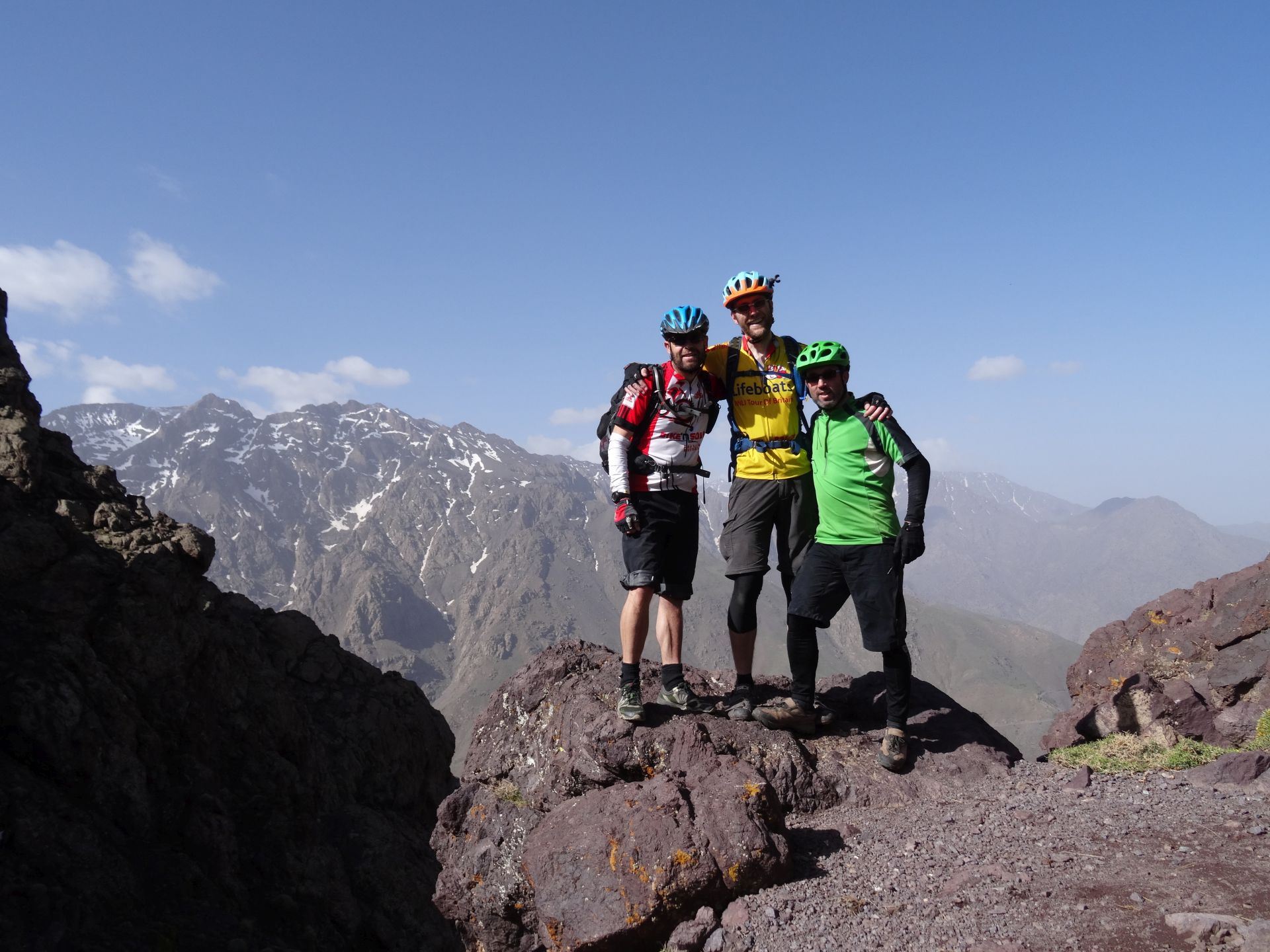 “Guys, I’ve broken my arm!” Oh no! Two months before we planned to leave the UK for our trip to Morocco, Steve, one of our group of three, gave us the terrible news. Our trip could be over before it even started!

Steve had taken a tumble on his mountain bike while we were away for the weekend in Wales. Back in the accident and emergency department of his local hospital, the doctor confirmed the bad news: Steve wouldn’t be able to ride a bike for a good few weeks. This was all the more worrying because our trip to Morocco was ambitious, to say the least. We would be traversing the remote High Atlas mountains from east to west by mountain bike, over two weeks, covering almost 300 miles. A top level of fitness would be needed to undertake what would be 50+ mile off-road days with 6,000 feet of climbing per day, at altitude and unsupported, staying in accommodation but carrying all our own gear. No guide, no back-up vehicle, entirely planned and run by our team of three. Steve wondered if he could possibly be ready in time. With a trip that big, Shaun (the other member of our team) and I were uncertain whether we’d be ready ourselves – and we didn’t have a knackered arm! We really felt for Steve.

But much to Steve’s credit he stuck with it, fitting in as much training as he could (think one-armed turbo-trainer riding), and we stayed as a three. He’s one tough and determined cookie. We had, incidentally, started planning the trip as a four but our friend Paul (from my 2014 North-South Wales Coast to Coast mountain bike trip) had bravely ruled himself out early on, giving us some sage parting advice: “You all need to go on a diet!”. Or was it: “You’re all going to die!” I can’t remember. Basically, he thought we were all bonkers.

I’d had the idea for this Morrocco trip some years back, inspired by an itinerary I’d seen in the brochure of a UK-based mountain bike tour company, KE Adventure Travel called the High Atlas Traverse. Even though riders would have support from multiple guides, a jeep and driver, KE touted the trip as ‘extreme’ in terms of both endurance and technical bike skills required, stating that it was one of the toughest trips they ran worldwide, tougher than even those in the Himalaya. And then they stopped running it… It was just too niche, apparently. 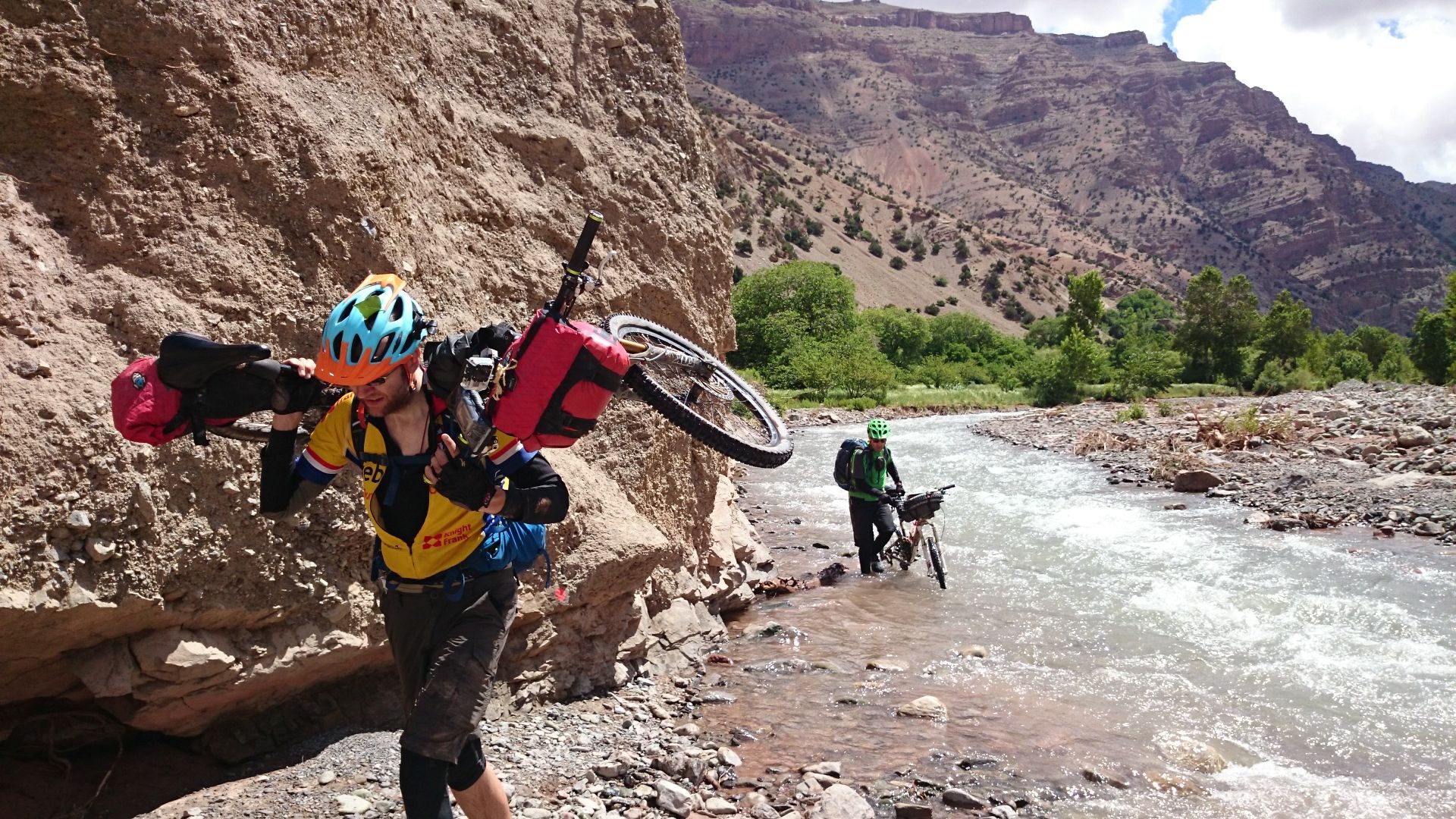 Not many ‘trails’ like this back home! © Shaun Grey

Nonetheless the idea didn’t go away. I’d grown up reading stories about mountaineers and explorers crossing remote mountain ranges, polar wastes, deserts and jungle. When Ranulph Fiennes crossed the Antarctic with no back-up, and when Reinhold Messner, Chris Bonington and Doug Scott climbed ‘Alpine style’ in the Himalaya, fending for themselves, without the assistance of pre-fixed ropes or porters lugging gear, I was left mesmerised at the prospect – the idea of being totally on your own, needing to use your initiative to get by. So, inspired by my own unsupported bike trip from Alaska to Mexico along the length of the Rockies solo in 2009 , and the Wales C2C trip, the idea for the Morocco trip grew.

As with my Rockies trip, I relished the prospect of following the spine of a mountain range. The High Atlas is the highest mountain range in North Africa (though seen as a discrete range; strictly it is a ‘range within a range’, forming a sub-region of the Atlas Mountains, where the full extent of the Atlas runs through Morocco then eastwards into Algeria and Tunisia).

So, with approval from my fantastic girlfriend Shim to go on the trip, I approached Shaun and Steve. We’d met through the Avon Outdoor Activities Club (AOAC) and they were the guys who had the skills, fitness and experience needed. Shaun had soloed a high-altitude traverse of the Pyrenees on foot, Steve had ridden the length of Wales off-road in five days (that is quick!) and both are highly experienced mountain bike guides. Basically, mountain biking legends! Due to the remote and unsupported nature of the trip, planning took six months and included much emailing, phone calls to Morocco, kit research and testing, plus regular meetings. For the latter, there may sometimes have been a pub involved, though there actually was an open laptop on the table too.

Next Post: Arrival & Transfer – UK to Marrakesh to Imilchil »