As day dawns I’m struck by just how magical a place this is: the valley is wild and spectacular, with towering peaks either side and no other dwellings. There’s a stream running over the bare earth, just a couple of feet from the house, where we all washed our socks last night! Under blazing blue skies, we bid our farewells and cross back over the river – the JCB is still going at it! To begin the road is pretty smooth and we make good time along the steep valley, perched above the river. But, as we near the village of Talat-n-Tazart some of the locals start gesticulating, pointing to the road by the river and shaking their heads. We aren’t clear what’s going on so we follow our instincts, well, actually, we follow three young boys who kept encouraging us to climb up a track, away from the river. As we later discover, the valley road (the only road) has been washed away in multiple places – the villagers along this 20-mile stretch of the valley can only get in and out on foot. 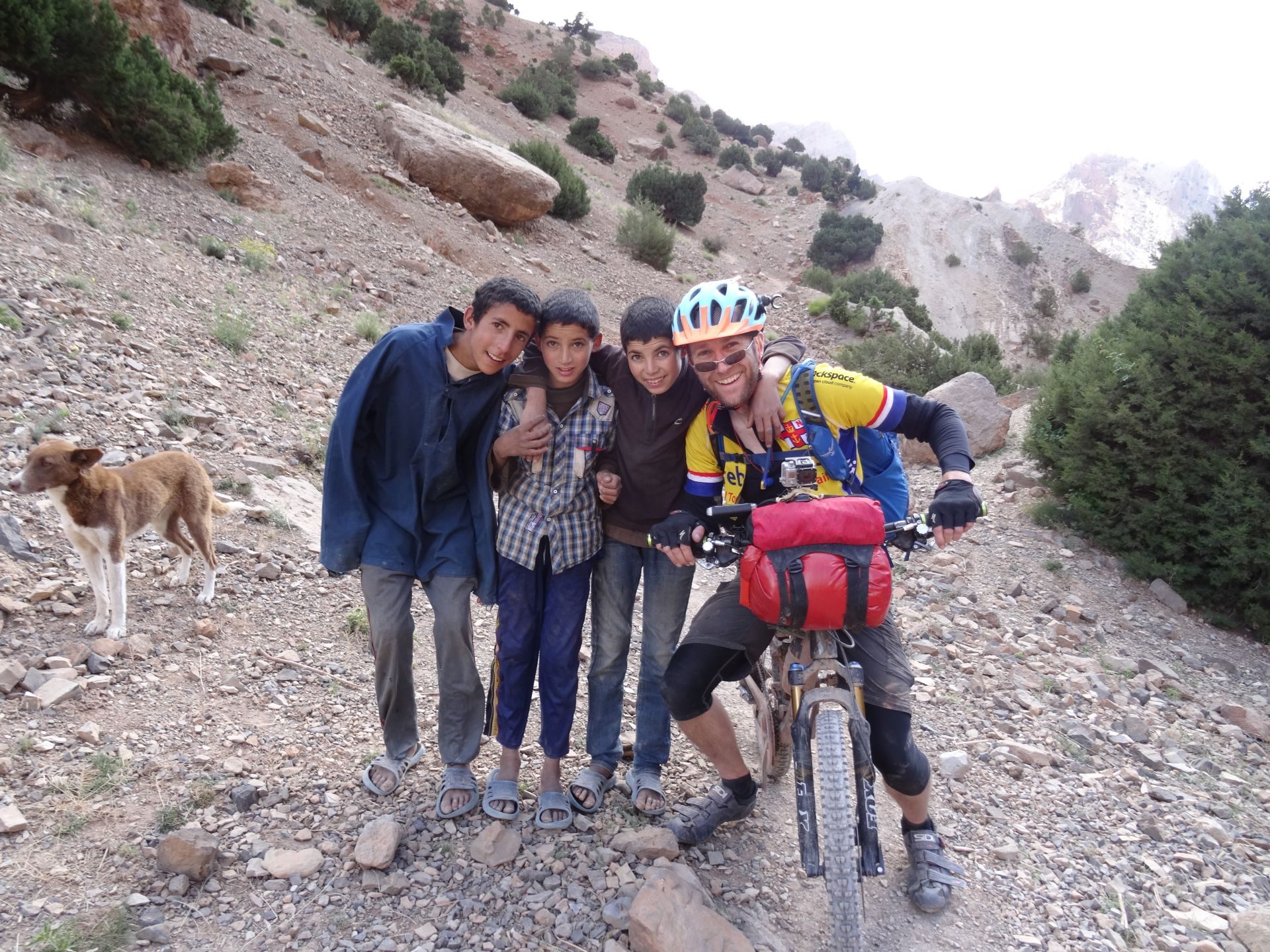 Our three little urchin friends, who show us a fantastic singletrack detour up into the hills, around the washed-away road. And their dog Max of course!
Above Talat-n-Tazart. © Steve Woodward

The three little urchins, accompanied by their dog Max, lead us up sheer scree slopes along a tiny singletrack. We ride short sections but the margin for error is minimal, with a drop of over a thousand feet even steeper than yesterday’s descent – at times our tyres are edging off the track, forcing an adjustment of body position and occasional rear wheel lifts to bring the laden bikes back on line. Hair-raising stuff! I absolutely love it. The kids seem to be loving it too, running ahead to watch us try to ride sections. In terms of a combination of exposure and technical challenge, especially on such a heavy bike, it’s some of the trickiest stuff I’ve ever ridden. 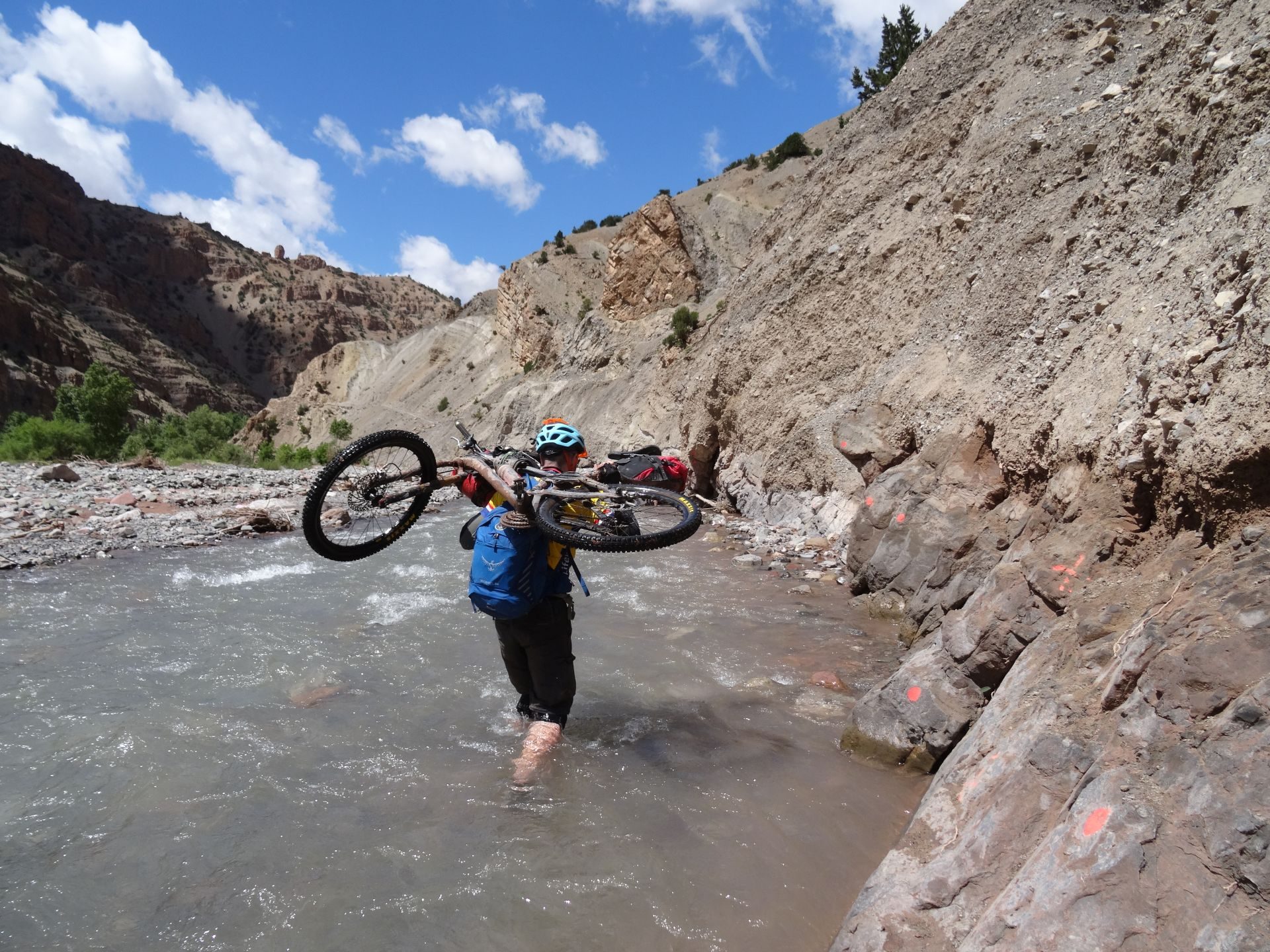 There is a road under the river apparently! …
River Tassaout, near Fakhour. © Steve Woodward

Dropping back down to the river via some tight, loose switchbacks, we say goodbye to the kids, thanking them with some of the chewy bars we had bought in Agouti. Back in the village we had again been approached by locals asking for medical assistance – this time for a small boy with a rash – and, once again, it is heart-breaking.
Along the river is tight singletrack through thick undergrowth. Ahead we bump our way across boulder fields, pogo-ing the bikes across the rocks. At one point we have to hoist the bikes above our heads and wade waist-deep along a fast-flowing section of the river, which is close to needing us to rope up for safety. And then we meet the gravel road that is accompanied by a smiley face painted on a rock, as if to say ‘well done, you made the detour’! 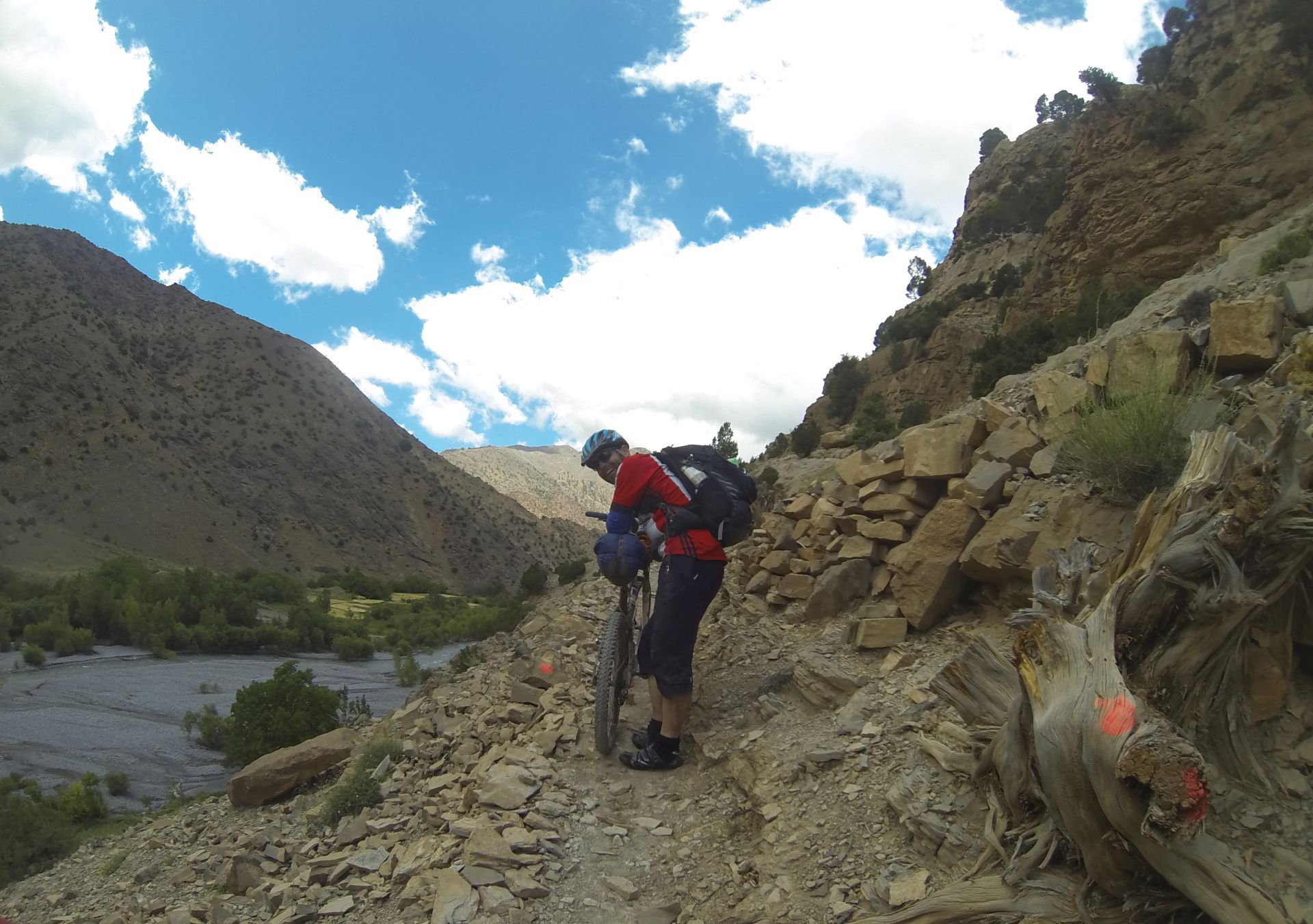 Trail-demon Shaun, nearing the end of the singletrack, but the trickiness of the riding is not letting up! Note the orange dots leading the way.
Approaching Toufghine, Tassaout valley

Joyously, the owner of our gîte, Mohammed, has chosen to surprise us and driven out to meet us – what a lovely thing to do. He’s accompanied by one of his frequent guests, a kind French woman in her 50s, an artist whose name we don’t catch. We arrive at the gîte at 3pm – a nice change from the late evening arrivals that have started to become the norm. Just as well, as we have a monster of a day to come. We wash our kit (we’re only carrying one set of clothes each) and leave it to dry in the sun and wind, wrapped around the veranda railings. The trickle of a shower requires some initiative, including the use of a stool to wedge the tap open. Mohammed is a nice guy, quiet and gentle, and we eat together that night.