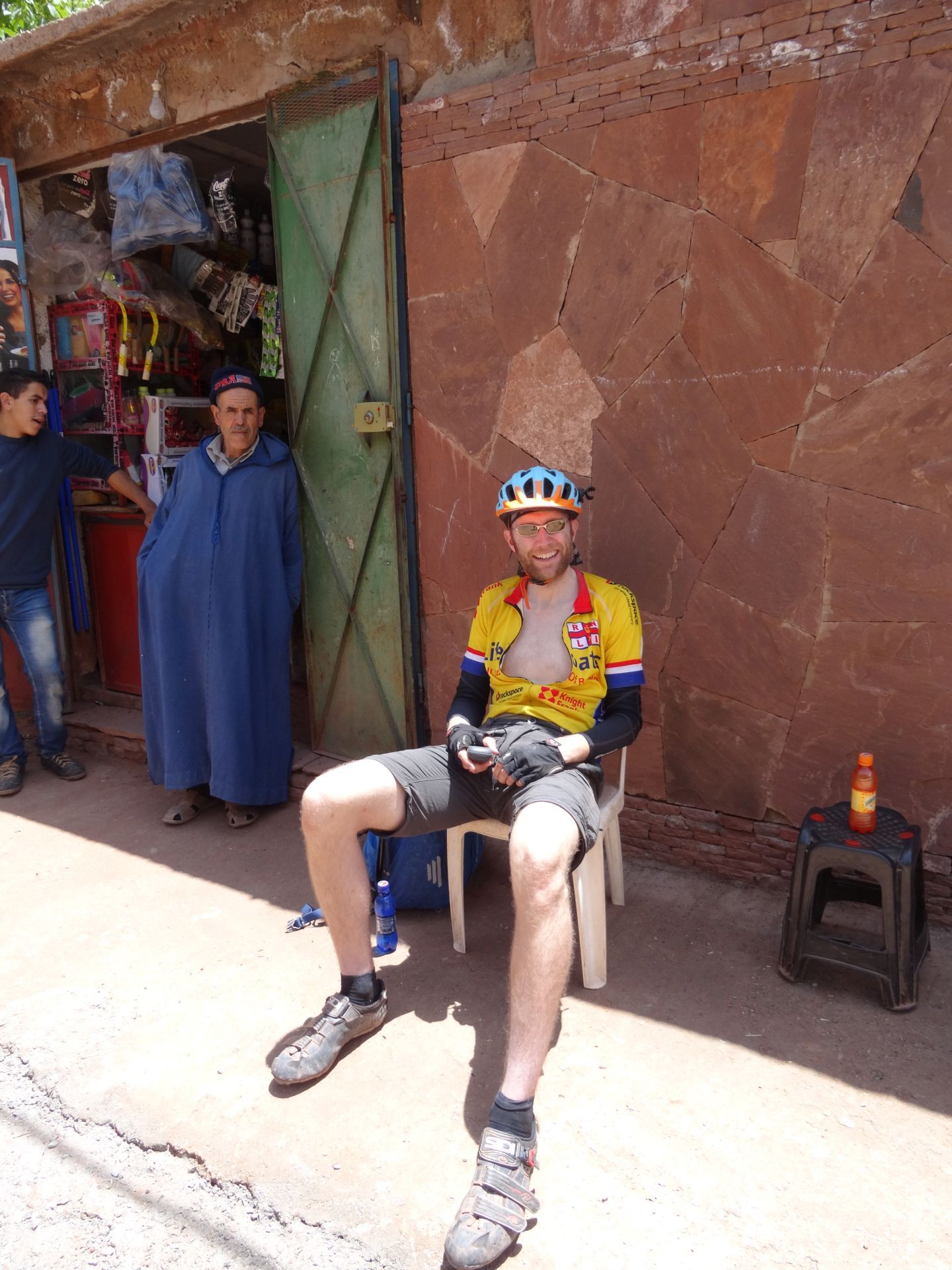 Resting up in the shade, readying to drink orange liquid sugar, during the steady 6-hour climb up the “Ouka Monster”.
© Steve Woodward

Shaun’s birthday. Yay! Being both a keen mountain and road cyclist, he is especially excited at the prospect of what lies ahead because it’s a real bucket-list item if you’re a roadie. Normally, I’d be excited too, but after a dodgy tummy all night I’m back in survival mode. Straight out of the blocks we are into a preposterously long road climb to the ski resort of Oukaïmeden (one of a handful of ski resorts in Morocco, all tiny but ski resorts nonetheless). The climb is nicknamed the ‘Ouka Monster’! It formed the brunt of an amateur bike race, the Marrakesh Atlas Etape, which took place for a few years, attracting international riders alongside top Moroccan road cyclists. In the next 20 miles we climb non-stop, gaining 5,500ft in height – up there with some of the biggest road climbs the European Alps and North American Rockies have to offer, similar in height gain to Europe’s highest paved mountain pass, the fearsome Col de l’Iseran. As we begin the ascent, we let the birthday boy go for it, and Steve kindly holds back to ride with me.

Despite not feeling great I’m at least able to keep rolling. I’m struck how this western side of the High Atlas, probably because it is much closer to Marrakesh, is so much more affluent than the eastern High Atlas. In the east, tourism is a rarity, life seems much harder and people seem far poorer on the whole, whereas here life seems less of a struggle. There are far more cars around too, even though we’re still up in the mountains. 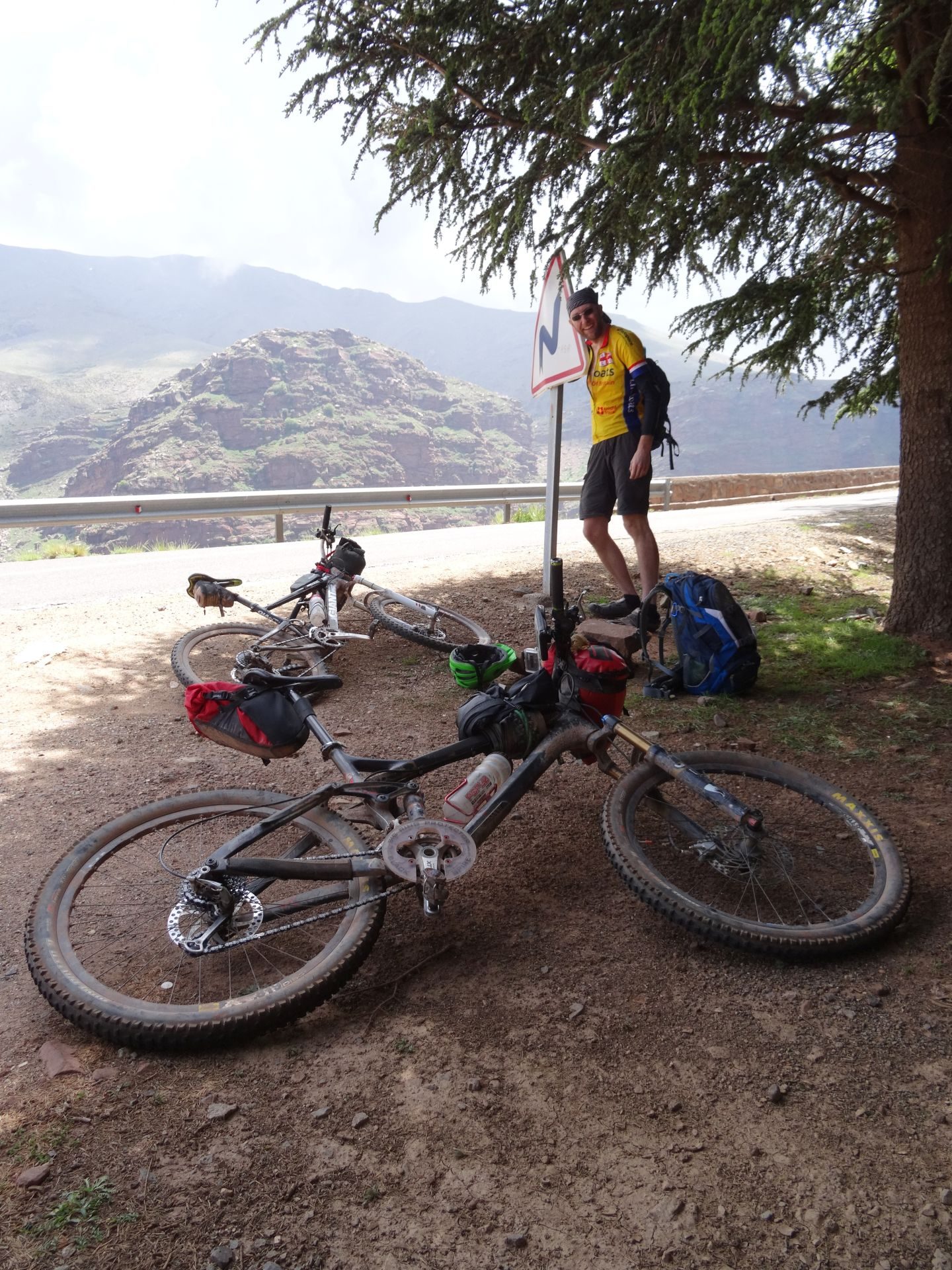 Steve and I stop a few times for drinks and for lunch. We are taking it really steady – it is a very, very long climb! As we wend our way up the valley of the Assif Aït Leqaq, the green woodlands that skirt the river lift my mood, as does the gentle hustle and bustle in the lower reaches of the valley, with farm workers busy and children playing beside the river.

As we climb still further the valley sides steepen, forming impressive stratified cliffs, and the woodland changes from deciduous to evergreen. After yet more ascent we’re past the treeline and into the upland moonscape that has become familiar over the past ten days. Crossing the road up ahead, we meet a group of British trekkers, their gear strapped to mules – they are on their way to the slopes of Mount Toubkal, the highest peak in North Africa at 4,167m (we won’t be going that high, but we are aiming to reach our high point in a couple of days).

Finally, after six hours of almost constant climbing, we arrive, in a swirling mist, at our destination for the night, Oukaïmeden, and find our chalet (owned by Club Alpin Francais, Casablanca branch!). The only way to book was by phone so, some months back, I’d wimped out of trying a phone call in French so had asked a friend, Micaela (aka Bill), who had previously lived in France. Our host Rachid chuckles as he tells me how Bill was extremely polite and very apologetic about her French, even though it was perfectly fine! So very English!

Shaun has loved the climb today and is made up to have done it on his birthday, and we have a nice evening at the chalet, reminiscing and laughing about the trip so far. The chalet is a great place, all wooden beams, maps, old skis and ice axes on the walls. We head off to our bunkroom ready to hit the hay, having gained over a mile in altitude today.