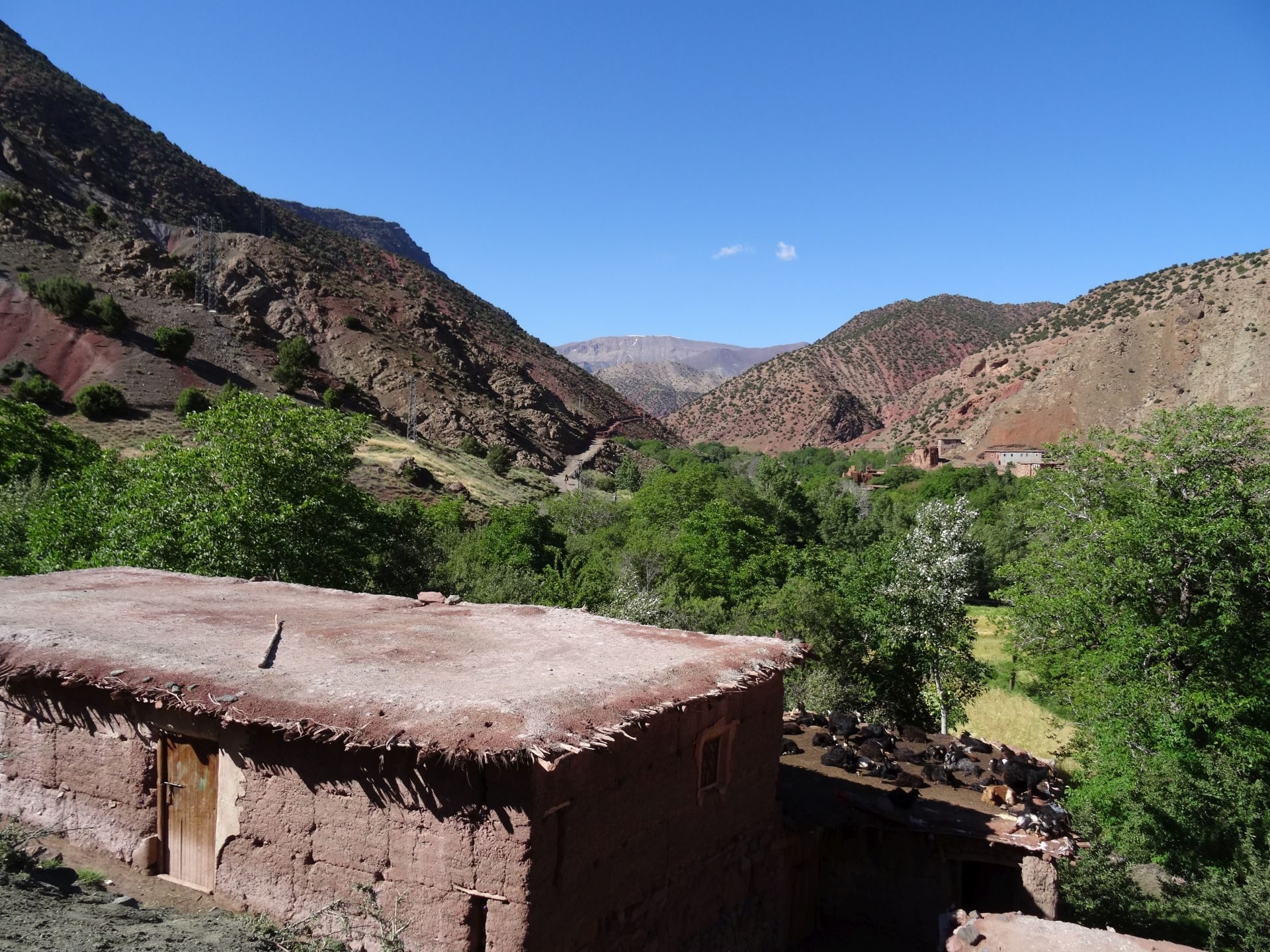 Touchdown! Blimey, we are actually in Morocco! My first time in Africa. After a lengthy wait in the endless queues at immigration we meet our drivers: we are in one vehicle and our hefty, boxed bicycles in a small truck. French is the second language in Morocco, as much of Morocco was under French rule for the first half of the 20th century. I am the only one of us who speaks any at all so on the way from the airport I practise my schoolboy French – my attempts with our driver don’t bode particularly well!

As we drive into Marrakesh at dusk, there are cars and people everywhere, horns blaring incessantly and an intense, frenetic buzz about the place. We pass through the arches of the ancient city walls to enter the historic quarter, or medina, a UNESCO World Heritage site dating back to the 11th century. It all feels quite magical, and hard to believe that only a few hours ago we were back in the UK. It isn’t long before our bike boxes are lifted into hand carts as we make the remainder of the journey on foot, into the labyrinthine alleyways of the medina. Our accommodation is pretty special: a beautiful traditional house, or riad. We’re met by the delightful Viviane, mother of the riad’s co-owner Jean. It is a veritable oasis amongst the hustle and bustle of the medina, built as it is around a beautiful courtyard set off with palm trees, and sumptuous decoration and antiquities from their travels around the globe. That night we eat in the courtyard of a similar place nearby, entertained at our table by a belly dancer no less! Such luxury would not last long… 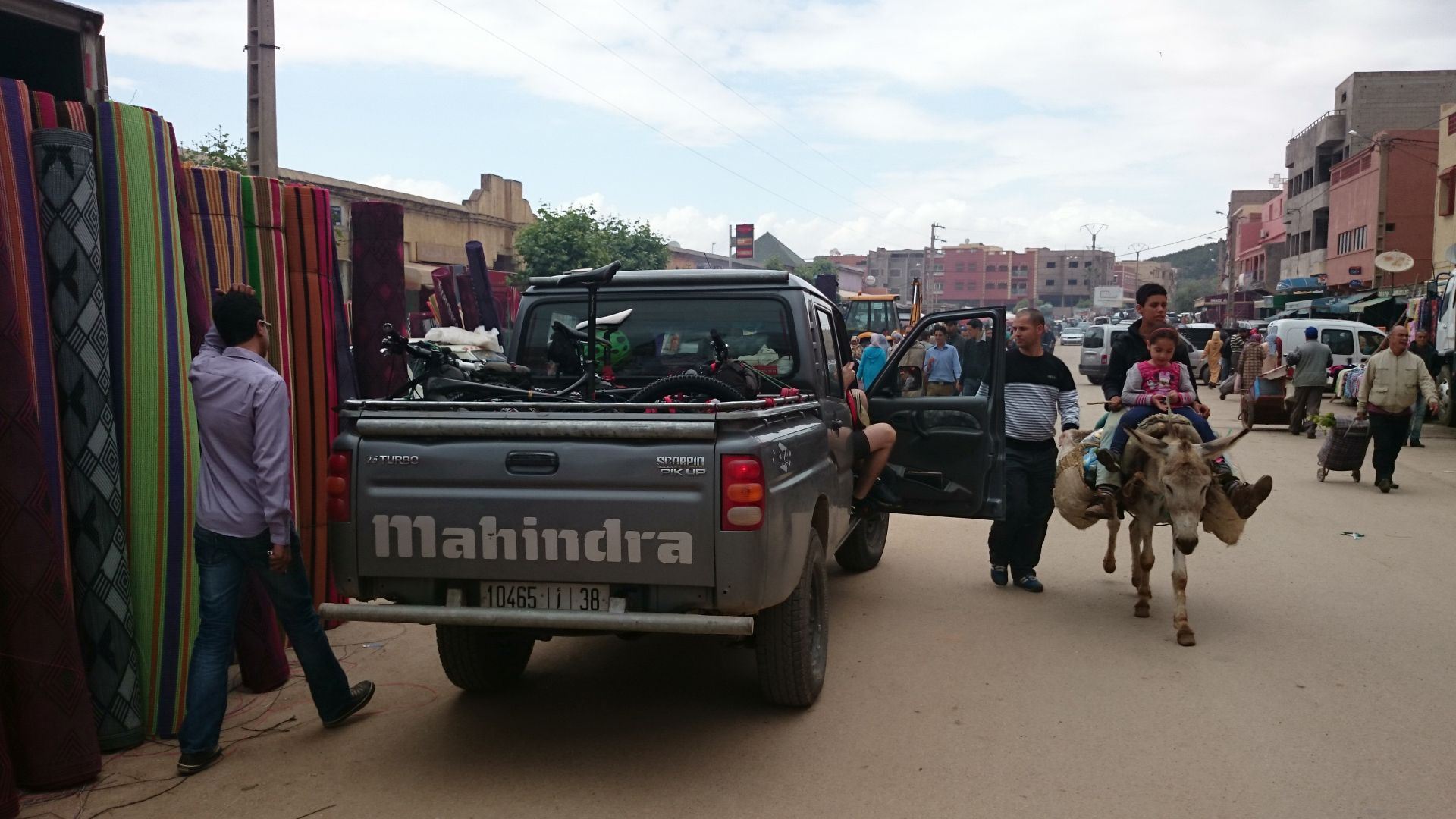 It’s an early start this morning, but first we need to assemble the bikes (airport delays prevented us doing it last night). Our driver, Abdel, waits patiently. Finally, we strap our bikes into the back of the pick-up and get underway. Abdel proves the consummate professional, being immensely attentive, knowledgeable and an all-round good egg. When we stop in the town of El Ksiba for some lunch he even negotiates with one of the stall holders outside the café to move some of his enormous rolls of carpet so we can keep our bikes in sight.

The process for obtaining lunch proves slightly bizarre: approach butchery ‘desk’ surrounded by slaughtered goats on meat hooks with heads still attached; ask for meat by the kilo; cue the butcher walking to front of the desk to carve off said amount, to then pass to the barbeque guys on the street; eat cooked meat as a brochette (with bread). It doesn’t help that I keep asking if we can have a brioche (pastry), confusing it with brochette! 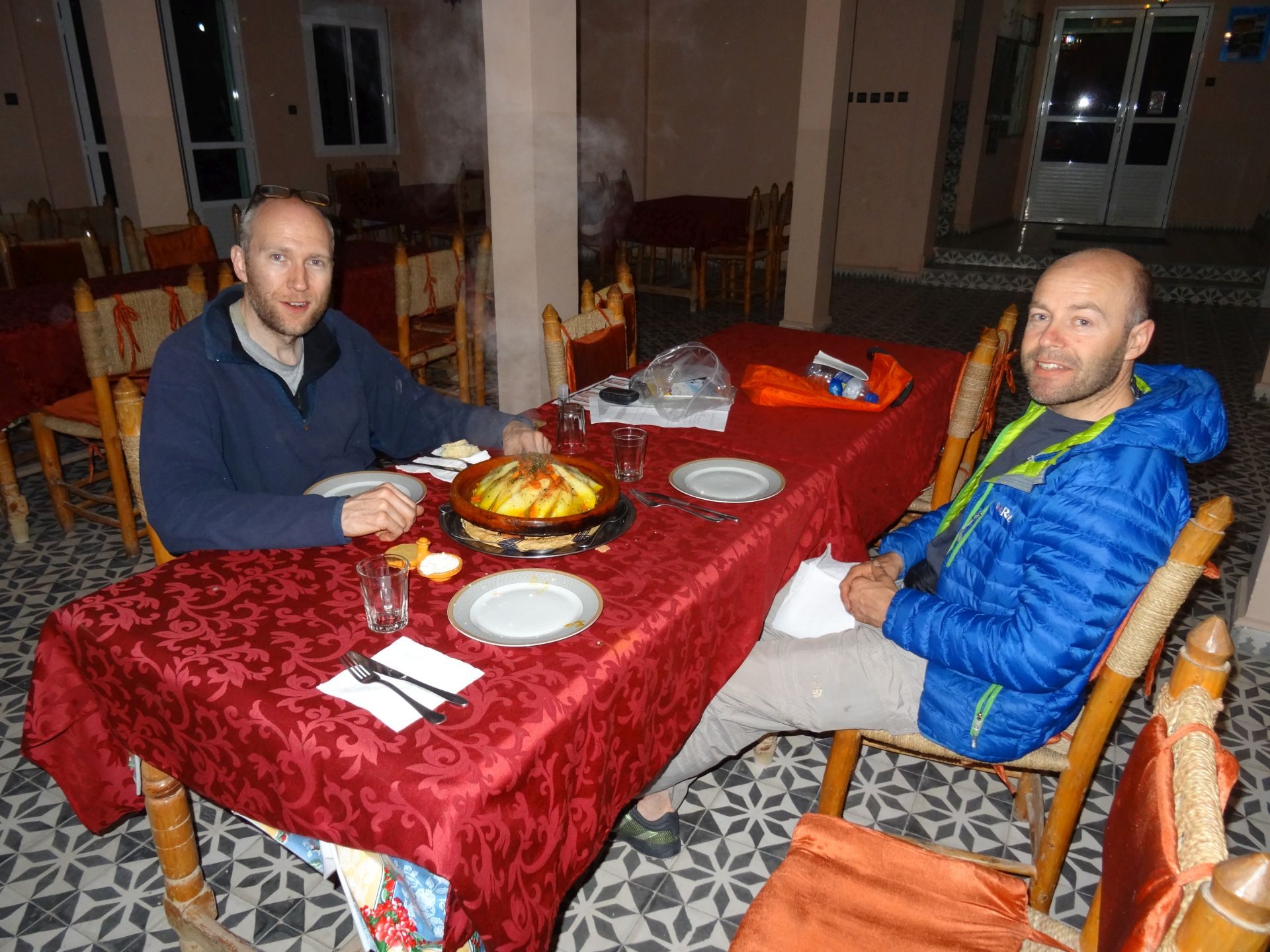 Six hours since setting off, after a fun but bumpy ride we arrive at our destination for the night, the small mountain town of Imilchil. Abdel hoots the horn and waves as he drives off, and then we are on our own. The sudden silence is stark, and slightly spooky. Having climbed in height, the weather has cooled significantly too, and low cloud and drizzle envelope us. The town feels almost deserted, but things start looking up when the immensely calm and very smiley hotel manager, Mohammed, appears and ushers us into the warm. He is one of those people who just makes you feel relaxed by simply being around them. We are the only guests, and perhaps the only tourists in town, we surmise. Later, with delicious tajine (a combination of meat and vegetables cooked in a conical earthenware pot) in our bellies, we check bikes, kit and food ready for our first day of riding tomorrow, before rolling out our sleeping bags and grabbing a couple of blankets in anticipation of the mercury dropping further that night. We are at around 7,000ft elevation. We are also way out east now, in remote rural Morocco, a world away from the holiday destinations back west, toward Marrakesh. Are we ready? We’ll soon find out.