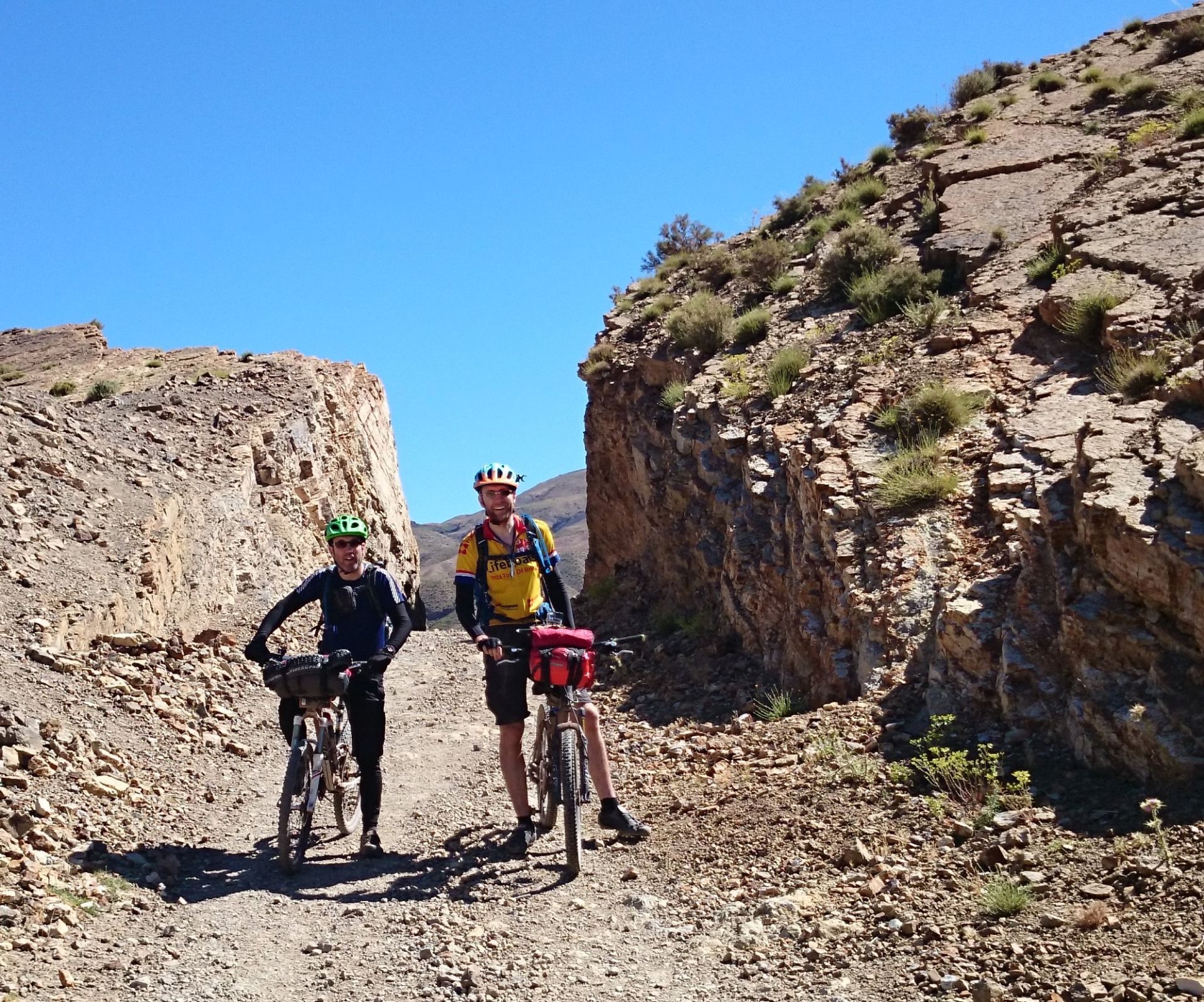 We made it through the rock cleft!
Near Tamzrit. © Shaun Grey

The big one. Wow, this was a hard day, one that almost broke the trip.

At 8am it is already hot and windless, the sun blazing down from a cloudless sky. We climb for a few miles up a road, accompanied by a friendly dog that appears from the undergrowth and lolls along merrily beside us. We head off on a dirt road to the village of Tamzrit, cutting through an impressive cleft in the rock. The village seems as if it’s from another era, with its mud-brick buildings merging into the red landscape and no street signs at all. And then the climb begins. It’s steep, loose and rocky, too steep to cycle. We push and carry the bikes, wishing for shade.

We meet a lone man cutting a path into the rock with a pick-axe – in this heat! It takes us four hours to reach the Tizi-n-Tamadla pass. The view is mesmerising, with the desert to the south and the heft of Mount Toubkal, Morocco’s highest peak, ahead. We meet a Swiss-German long-distance hiker who’s travelling with a tent but, for some reason we couldn’t quite comprehend, tells us he has given away his tent poles! He seems happy enough though. 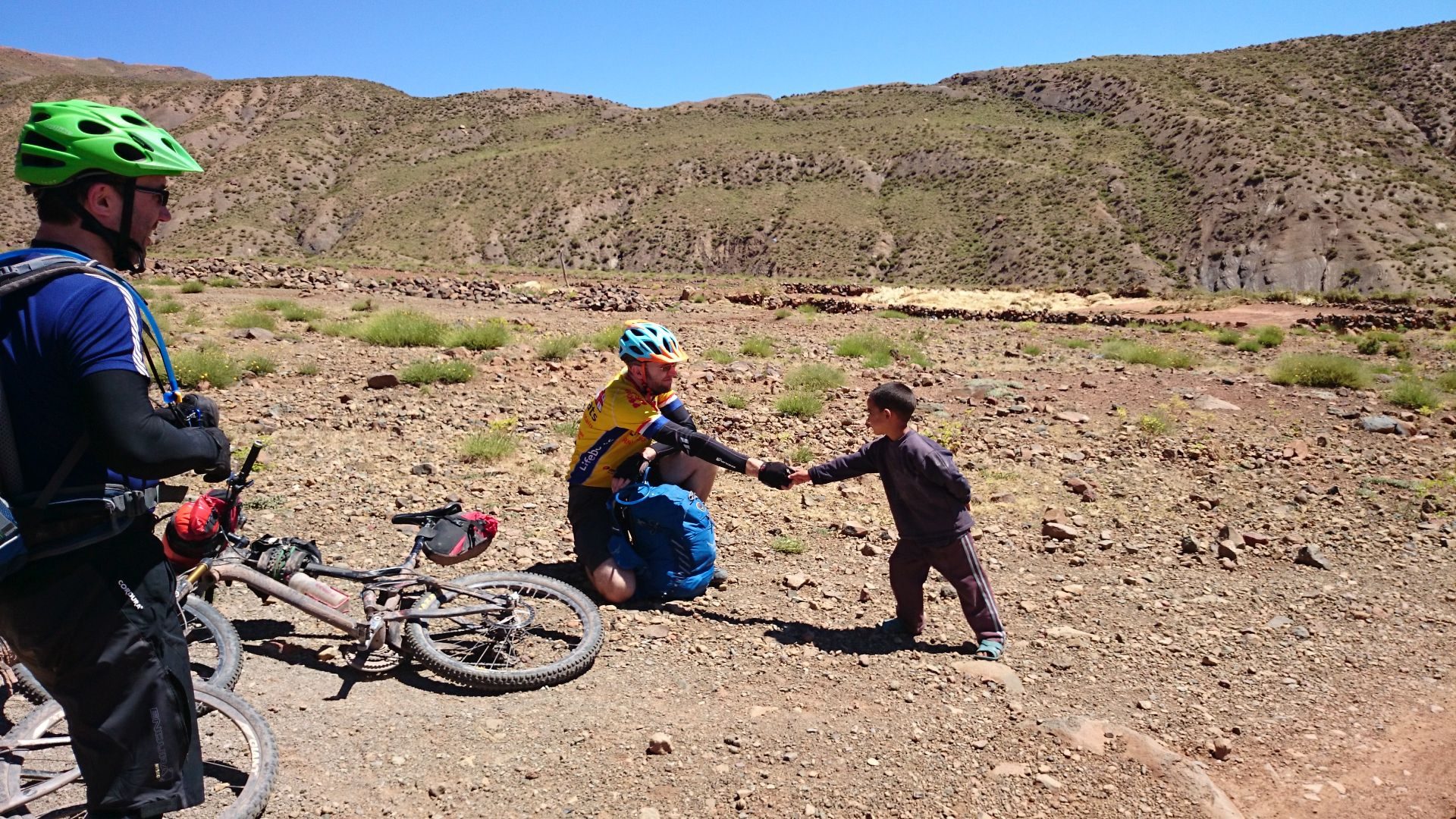 We stop for lunch and Steve loses his footing on the steep scree and falls onto his bad arm! Oh no! Thankfully, he’s just a bit bruised. The descent is partially rideable, but the exposure is severe so we all err on the side of caution and push some sections. On the rideable sections the gravel is so deep it’s a bit like trying to pedal through treacle. The descent goes on and on, until we reach a huge dried-up river bed. The going isn’t much easier – at times we have to lift bikes over boulders.

Eventually, feeling completely baked, we make it across and onto a singletrack. However, this isn’t the salvation we were hoping for – in fact, it’s even harder than the river bed! It’s so tight, with barely enough room to squeeze through endless clefts in the rock, our wheels wedge stuck constantly. We are all cursing like sailors. It’s getting dark, and we still have many more miles of this stuff! At the back of my mind, I’m conscious this sort of terrain is notorious for ripping off rear derailleurs… 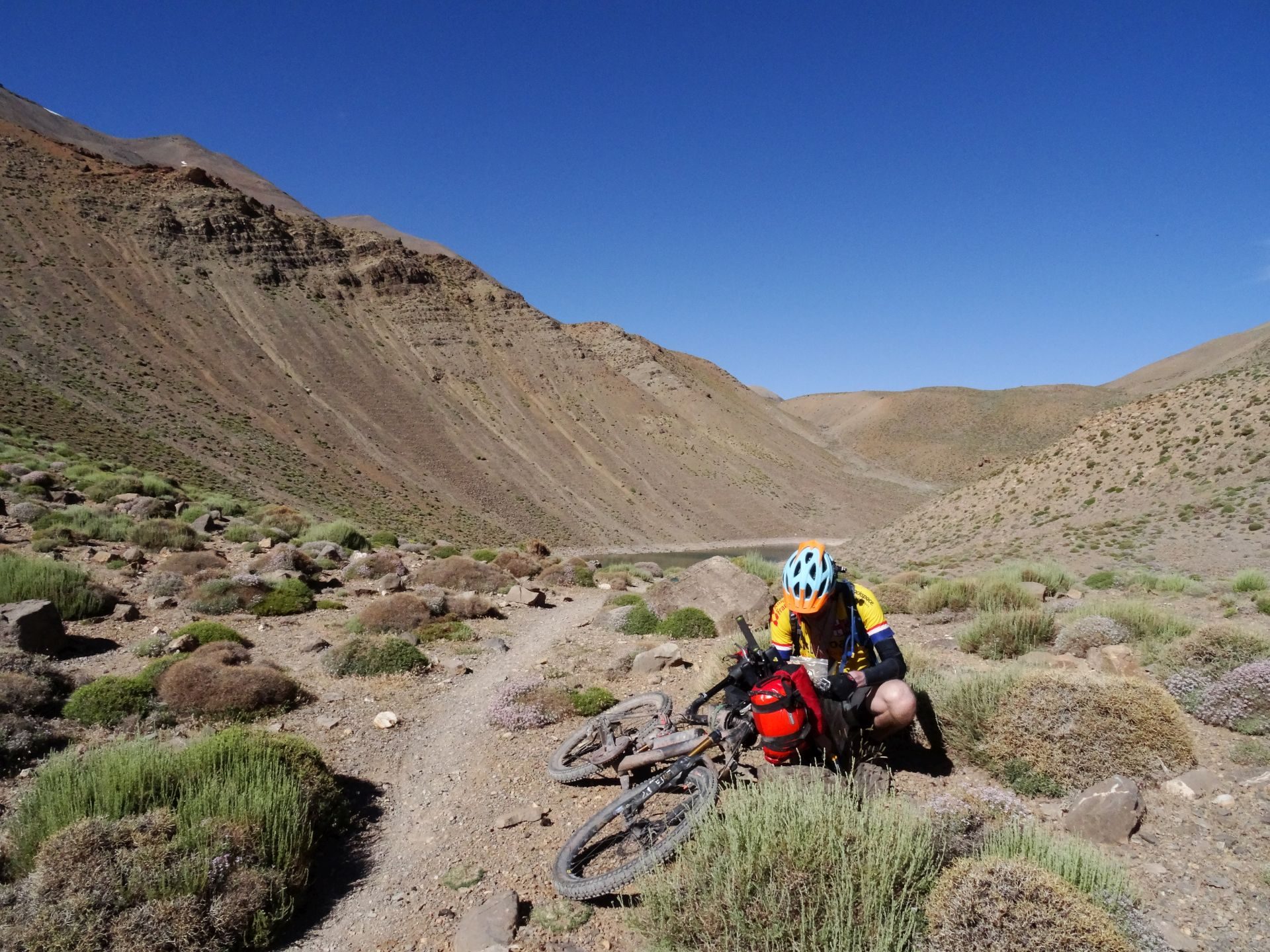 Want shade? That`ll be your bike helmet mate! So hot!
Lake Tamda behind, and finally something more rideable! © Steve Woodward

We stop for 10 minutes every hour, to rest and eat. One time we sprawl in a bowl of dust devouring sardines like ravenous cavemen. I think we may be going feral. On and on the impossible track goes, and then I go over the handlebars, in comedy slow-motion, but I still crash hard onto rock. Luckily, I’m fine. Now it really is dark, and we only have emergency lights with a small beam, not ideal for technical riding. At long last, we make it to a gravel road. We’ve been riding for 14 hours and we’re still not there! Then I change gear and CRUNCH! My rear derailleur has snapped off the frame. Clearly, my OTB had weakened the mech hanger. I have no gears and no way to pedal. Shit. It’s pitch black, there are no cars and we’re about 3 miles from our accommodation. We’re all carrying spare mech hangers, so we set to work replacing it then try calling our accommodation. Miraculously, I have mobile coverage and in muddled French let him know we are still on our way. Then, to add insult to injury, I suddenly feel like I’ve been punched in the stomach! And again! I run into the bushes and violently evacuate my bowels. Nice. I take a pill to try to bung me up and we push on. Half an hour later we reach our accommodation. We’ve made it! Somehow! A beast of day… 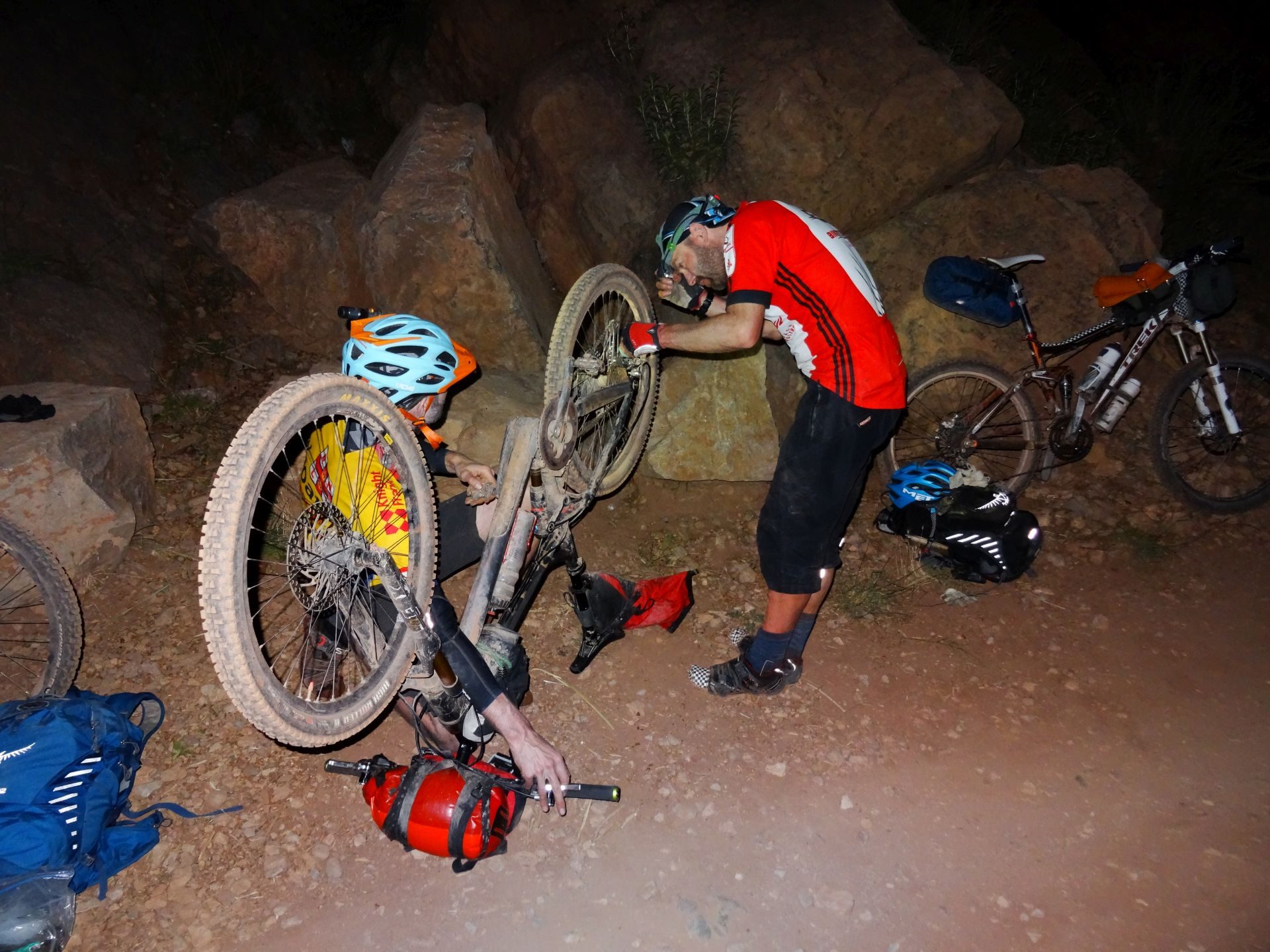 Repairing a snapped-off rear derailleur in the dark, after nearly 14 hours on the bikes. “Can we fix it? … Yes we can!”
Shaun AKA Bob the Builder / master-mechanic does the final checks … Somewhere between Tighza & Anguelz! © Steve Woodward

Our host, Hussein, a lovely, gentle man, proffers slippers and gestures for us to come and sit together on cushions on the floor. He tries to get me to eat – I manage a bit of bread but feel highly nauseous and like I’m about to pass out so make my excuses and wobble upstairs to bed.

Graciously, Steve and Shaun opt for the twin room and give me the double. That night I make repeated trips to the bathroom but eventually I get to sleep and, thankfully, when it came, it was a good one. Bliss.