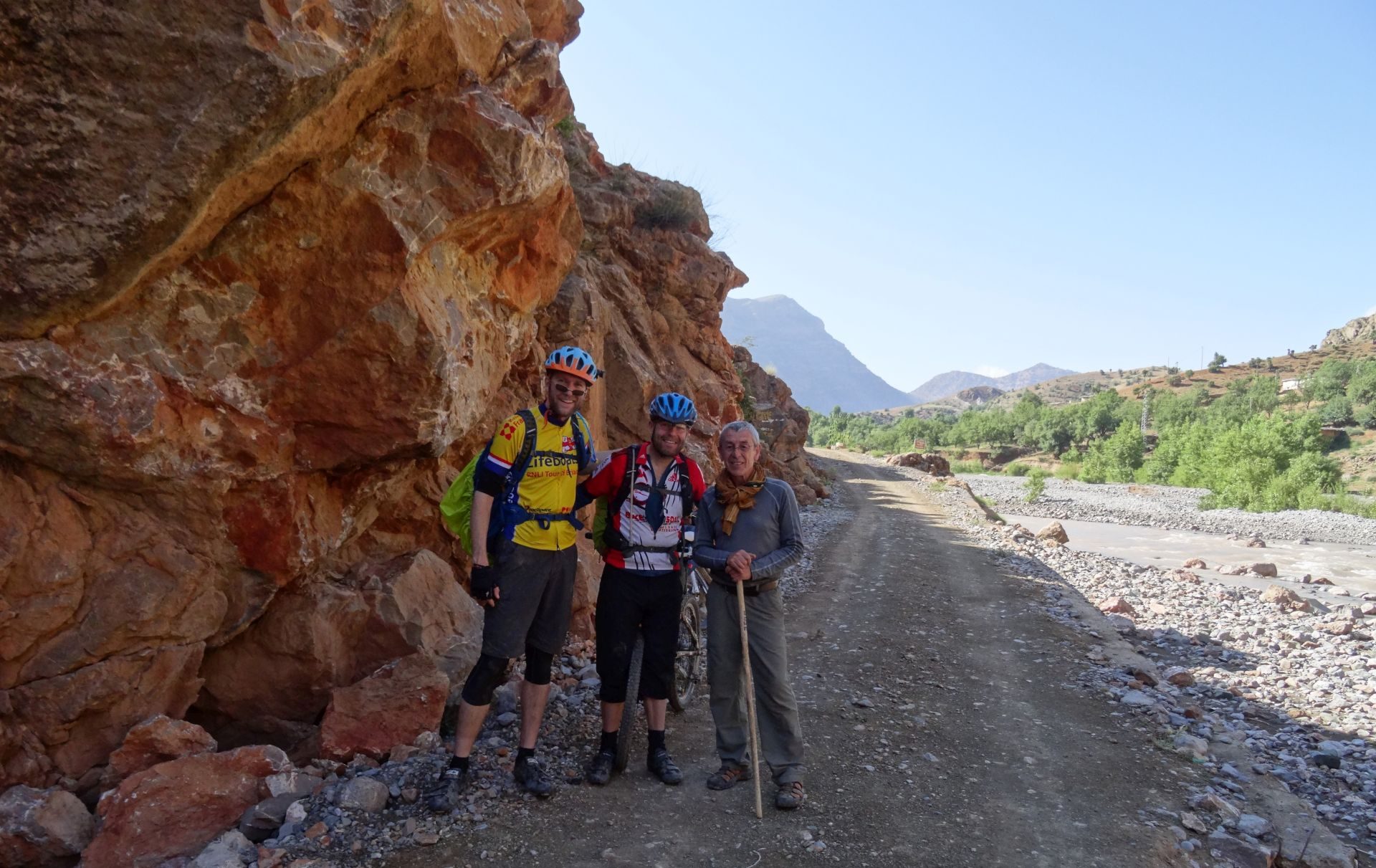 With our amiable host from last night, José.
Setting off from Anergui. © Steve Woodward

Despite our comfortable room we awake early, not feeling that well rested, knowing we have a big and particularly remote day ahead. Having checked with José on arrival, we’d determined that the Assif Melloul river gorge was passable, just! The word ‘river’ in Berber, the local first language of the mountains, is assif and in tight mountain canyons such as these they are notorious for flash floods that can submerge and wash away roads and tracks with terrifying speed – we had been warned!

We ride along the floor of the gorge, crunching through deep gravel lifting our front wheels over occasional small boulders, which makes for some technical riding, not to mention deft balance – tricky when carrying so much weight, but deeply satisfying. The gorge is a glorious spectacle, soaring upwards hundreds of feet on both sides, its orange and ochre cliffs ensconcing us tightly as the rapids of the azure water pummel their way along. After a few miles we realise what José meant when he said a bit of the route is a ‘little tricky’: it was under 3 feet of fast-flowing water! We make our way through, pushing the bikes, their rear wheels being whipped sideways by the current. After crossing we sit down for a breather and I tell the guys that was why I’d insisted we keep all our gear in dry bags, and then reveal that I had opted not to show them a photo I’d found on the internet of a group wading through the very same river and portaging their bikes above their heads – which doesn’t go down very well. Oops, bad move, Jon. I try to reassure Shaun and Steve that this was the only thing I haven’t told them, which is true. 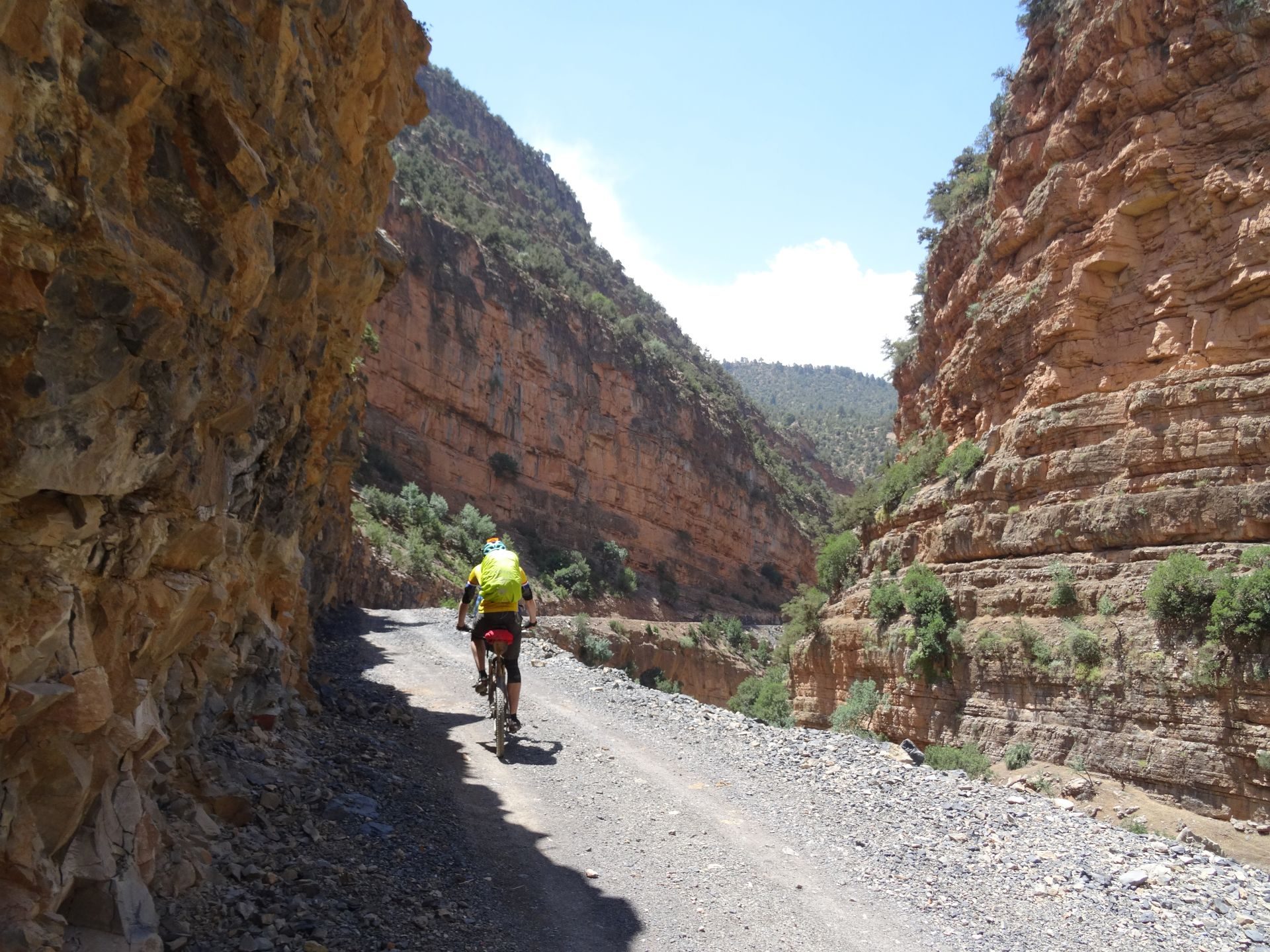 What a place!
The Assif Melloul gorge continues. © Steve Woodward

We emerge from the gorge into baking heat. I push ahead, up a gravel track away from the river, remembering how I’d ridden in the mountainous deserts of Mexico with far heavier bags and been fine – except I’m not as fit or as acclimatised to the heat now. It isn’t long before I am exhausted, staggering off the bike to some tree cover and feeling sick: heat exhaustion!

It’s at this point we realise we’re all running very low on water. We’ve been climbing for about 30 minutes. We consider whether the way ahead could have water, looking at the terrain on the map – maybe, maybe not… With very few villages ahead (and some villages on our map have turned out to be abandoned) we make the frustrating decision to go back the way we’ve come, losing height, to meet the last stream we crossed. We fill up using our water filters, taking on as much as we can carry (about a gallon each), and then, with brutal swiftness, a thunderstorm sparks into action around us, to add to the drama! 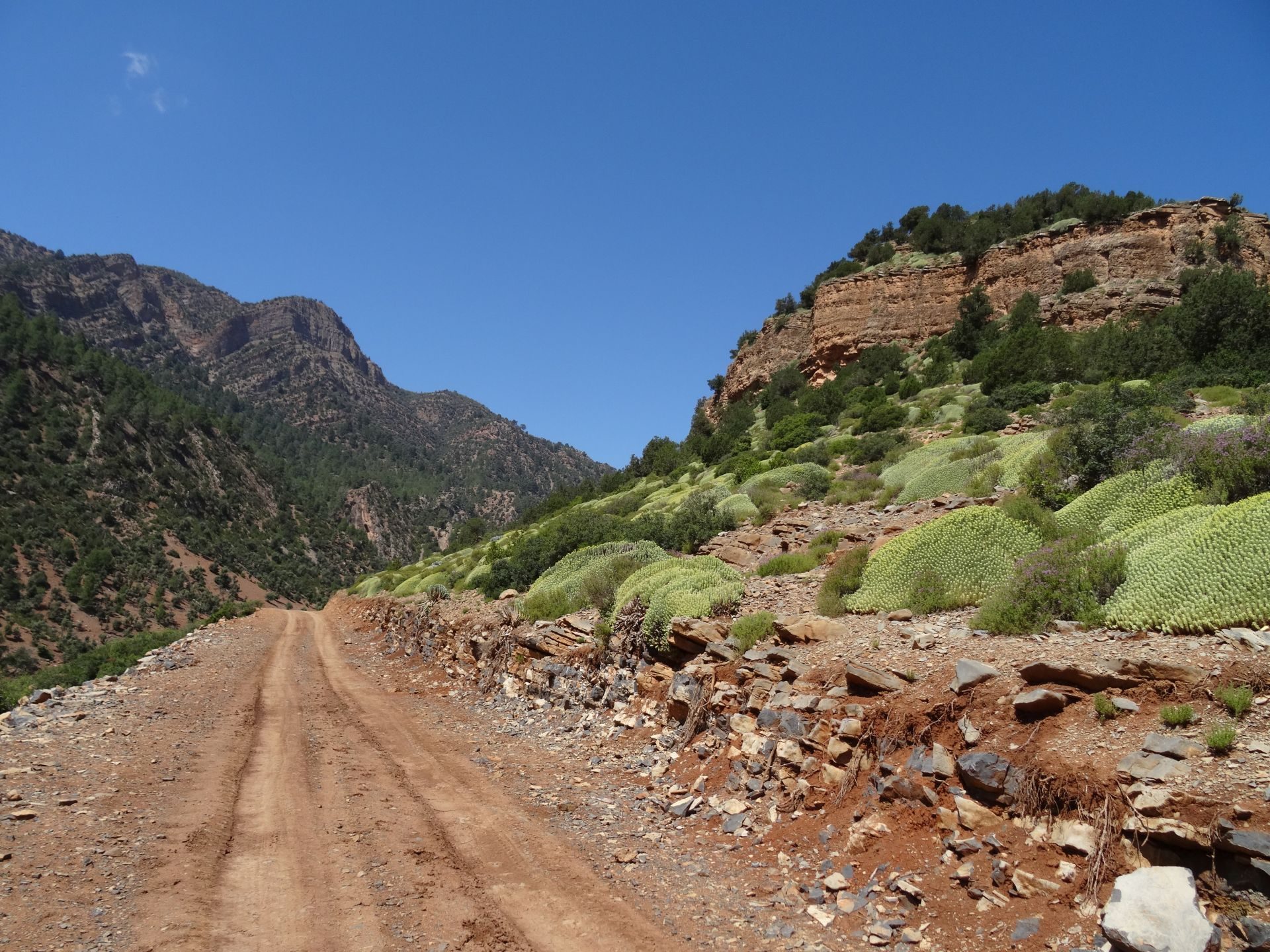 It’s getting hot! (wow, is it getting hot …)
Above Assif Melloul gorge. © Steve Woodward

I am at least now nicely cooled from the rain, but still in a pretty bad way. I make desperately slow progress uphill, Shaun gallantly hanging back to encourage me. We stop every half hour or so for food – I have a recollection of being slumped onto my knees in gravel, cold water streaming down my face from the deluge, hunched over a tin of sardines that I’m shovelling it into my mouth with my fingers, trying not to gag as I know I need to eat to keep going. The others are finding it tough too – the climb goes on for hours with no let-up. And after the intense heat earlier, we’re now trying not to get cold. Holiday? This is a sufferfest!

A significant deadline at work just before leaving, along with all the planning, meant I started this trip pretty shattered. Shaun had also been dogged by the demands of work and was pretty knackered too. And of course, poor Steve with his still healing broken arm, was arguably the most challenged of all. Together we made quite a bunch, but we were hanging in there…

On and on we toil, upwards, in the rain and into the cracks of thunder, through the pine forest. At times, and this is very unlike me, I walk and push the bike. We all do. Despite the rain we don’t pass anywhere we could pick up water, so we’d made the right decision there then! After what seems like an age we eventually reach the pass. It’s 8:30pm and we still have a way to go. 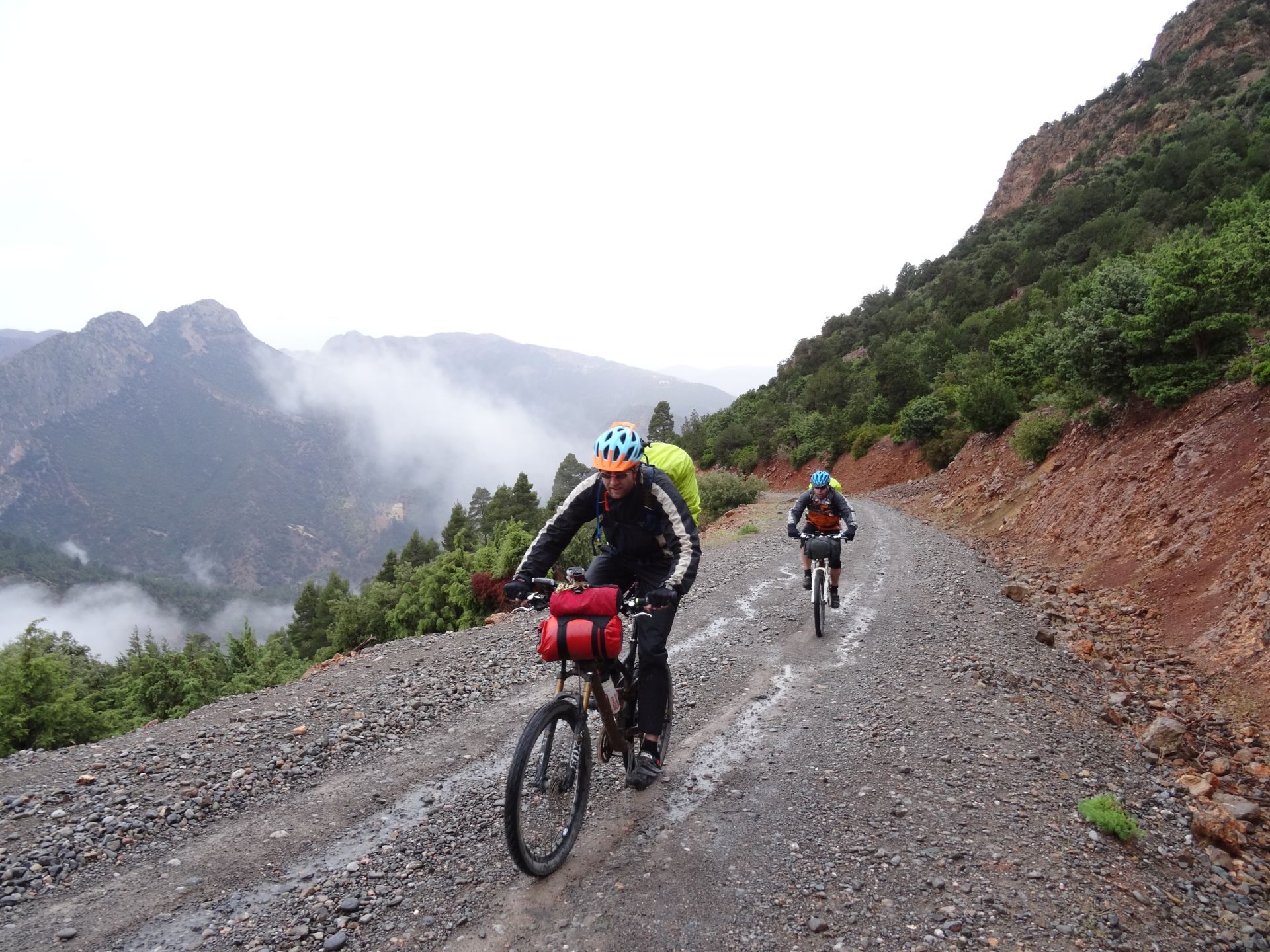 A really, really tough day on the bikes!
The grind in the rain toward Zawyat Ahansal, & our accommodation for the night. © Steve Woodward

Steve is doing okay spinning along beside me, and I’m feeling a little brighter, those sardines clearly worked their magic! Shaun is starting to feel a real chill, so pushes on ahead to try to warm up. Finally, around 10pm, in almost pitch black, we arrive at Dar Ahansal. Now shivering, Shaun makes a dash for the, thankfully, gloriously hot shower – he can’t remember getting this cold in a long while. I’m in one of those drunken-feeling tiredness hazes, which I occasionally get after a monumental effort, and Steve is also pretty beat.

There are a dozen or so French tourists staying, plus a friendly American who is coordinating volunteer activity, including building wells and washing facilities. While our accommodation is grand (a dar is a traditional Moroccan house, generally smaller than a riad with no courtyard) the area is still poor. During the whole day we only passed a handful of construction workers, and while we could occasionally hear distant voices up in the hills, we didn’t see another soul until we neared Dar Ahansal.

As I wait for the shower we chat to the French and, thinking only that I must get out of these wet clothes, I whip down my cargo shorts. Luckily the Lycra undershorts I’m wearing stay in place! Tired brain and body. And one of my hardest days on a bike. Dinner. Bed.