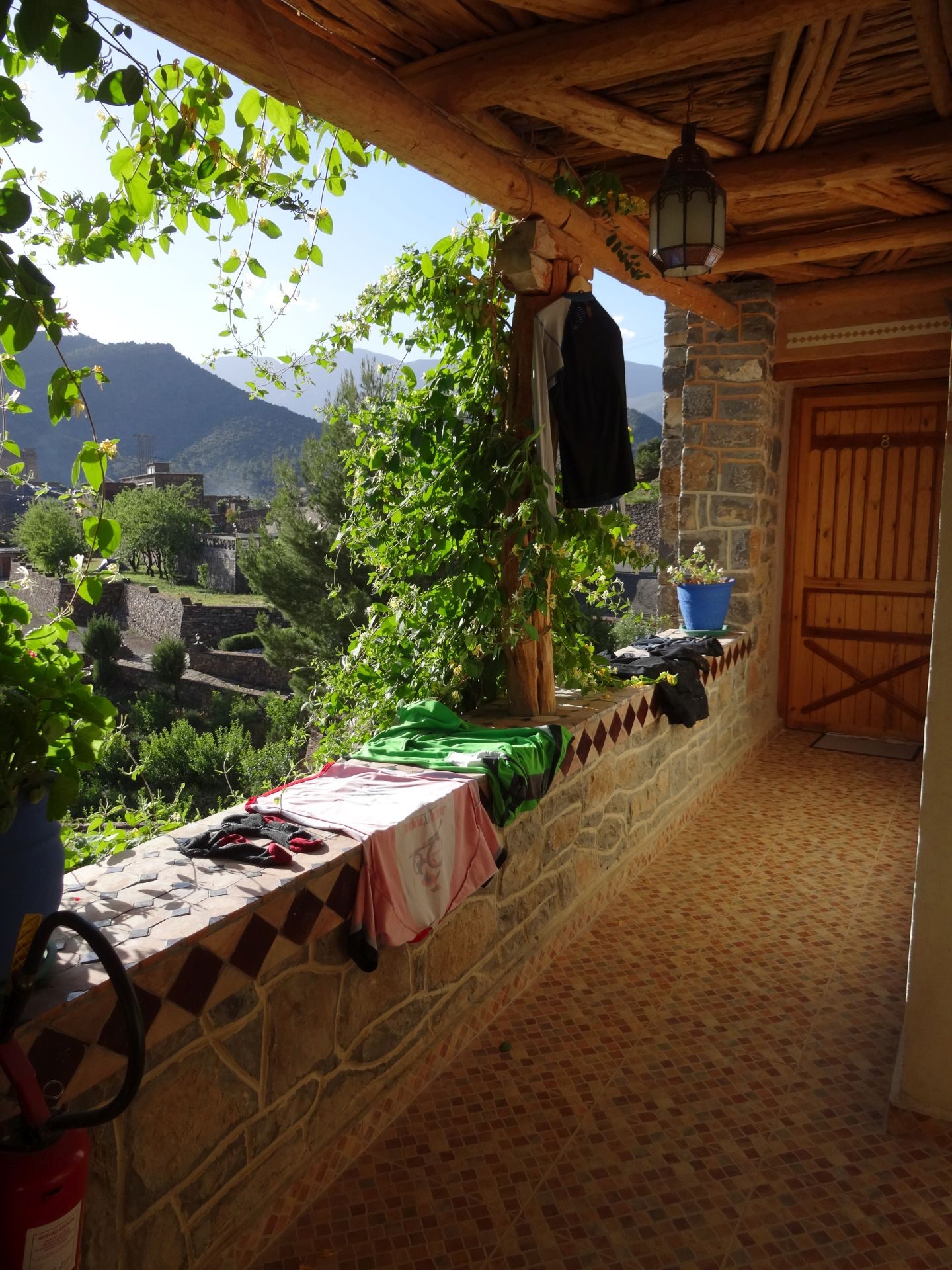 Before setting off, some time to appreciate our wonderful accommodation.
Dar Ahansal, Zawyat Ahansal © Steve Woodward

“I almost sat on a scorpion!” exclaims Steve, a little shaken. We’ve just reached the top of the day’s first pass (over 8,500 feet) and stop to feast on tinned sardines, bread and dates, our staple food. The day began less eventfully, with a seemingly endless 6-hour climb up to the passes of Tizi-n-Lissi, Tizi-n-Tsalli-n-Imenain and finally Tizi-n-Tirghist, on tarmac then hardpack dirt. In reality, there are flats and short, fun descents between the passes, but the general trend is up.

We stop to fill our hydration bladders at a delightful roadside spring, the water spouting from a fissure in the rock. After yesterday we are acutely aware of the need to take on water at any opportunity. Despite being overcast it is hot and we are each drinking about a litre an hour.

At the Tizi-n-Lissi pass the scenery continues to be spectacular, now open and vast with barren, muscular peaks flanking us, including 12,064ft Jbel Azourki. The final, mostly gravel, descent is just stunning, and we let rip, carving around slight berms and taking the apex around corners. Shaun and I mark one another on the descent while Steve, not wanting to tumble onto his still-healing arm, takes it comparatively steady – normally he’s a whippet on the downs, though he’s still pacy here! 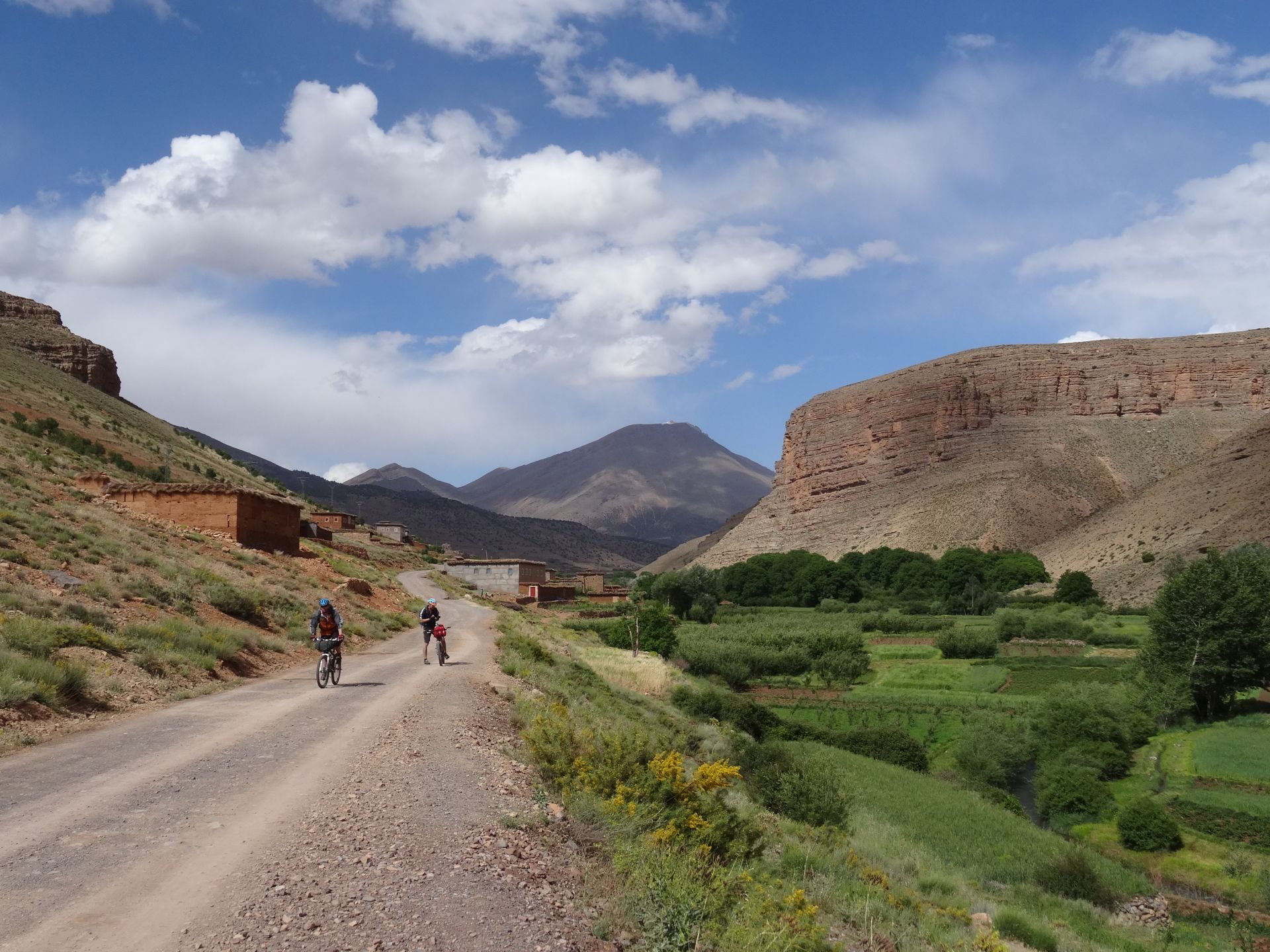 Entering the lush splendour of the Agouti valley.
Just west of Aghbalou, with Jbel Azourki (12,064 ft) on the horizon. © Steve Woodward

As we drop into the Agouti valley the sun appears and its warmth is a real tonic. After the moonscape earlier, the intense green of deciduous woodland along the river banks is very welcome. But the beauty of the valley is in stark contrast to the reality of life for some of its people: a local guy approaches us on foot to ask if we have any antibiotics for his young son, who has what looks like a very sore weeping eye. I’m carrying emergency antibiotics for our group but, not being medically trained, we hand over a couple of over-the-counter analgesic tablets instead – it’s one thing us using antibiotics on ourselves but another thing entirely if we give a powerful, prescription-only antibiotic to a child. At times like these I wish I was equipped to help properly. 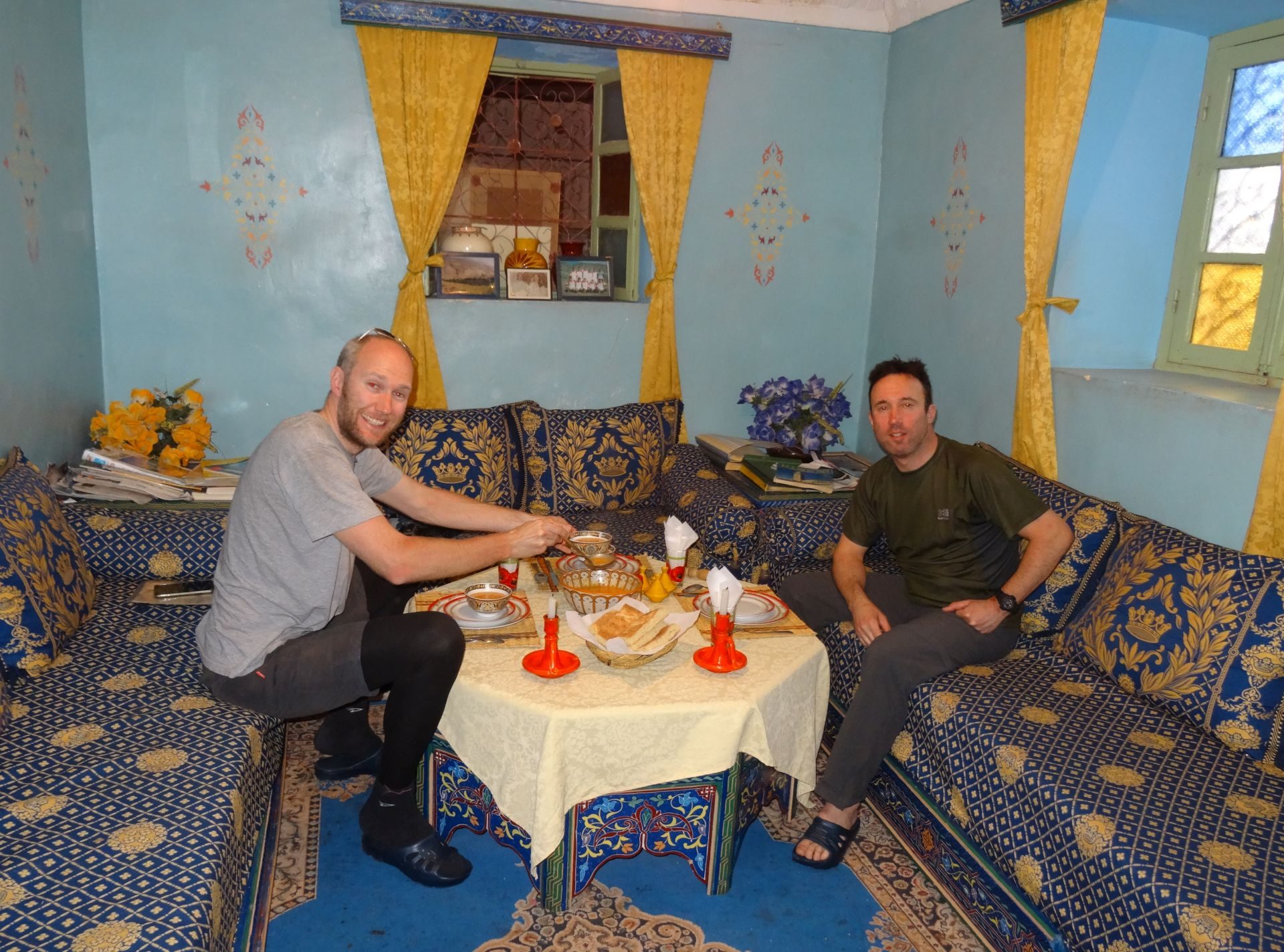 Flilou La Maison Berbère, our accommodation for the night in Agouti. © Steve Woodward

As we ride up to our gîte we’re met by our host, Jamal. He leads us up to the roof terrace and, as we relax on sumptuous sofas in the sun, we look out over the valley toward 13,346 ft Jebel M’goun, the third highest peak in the Atlas. What a great day!