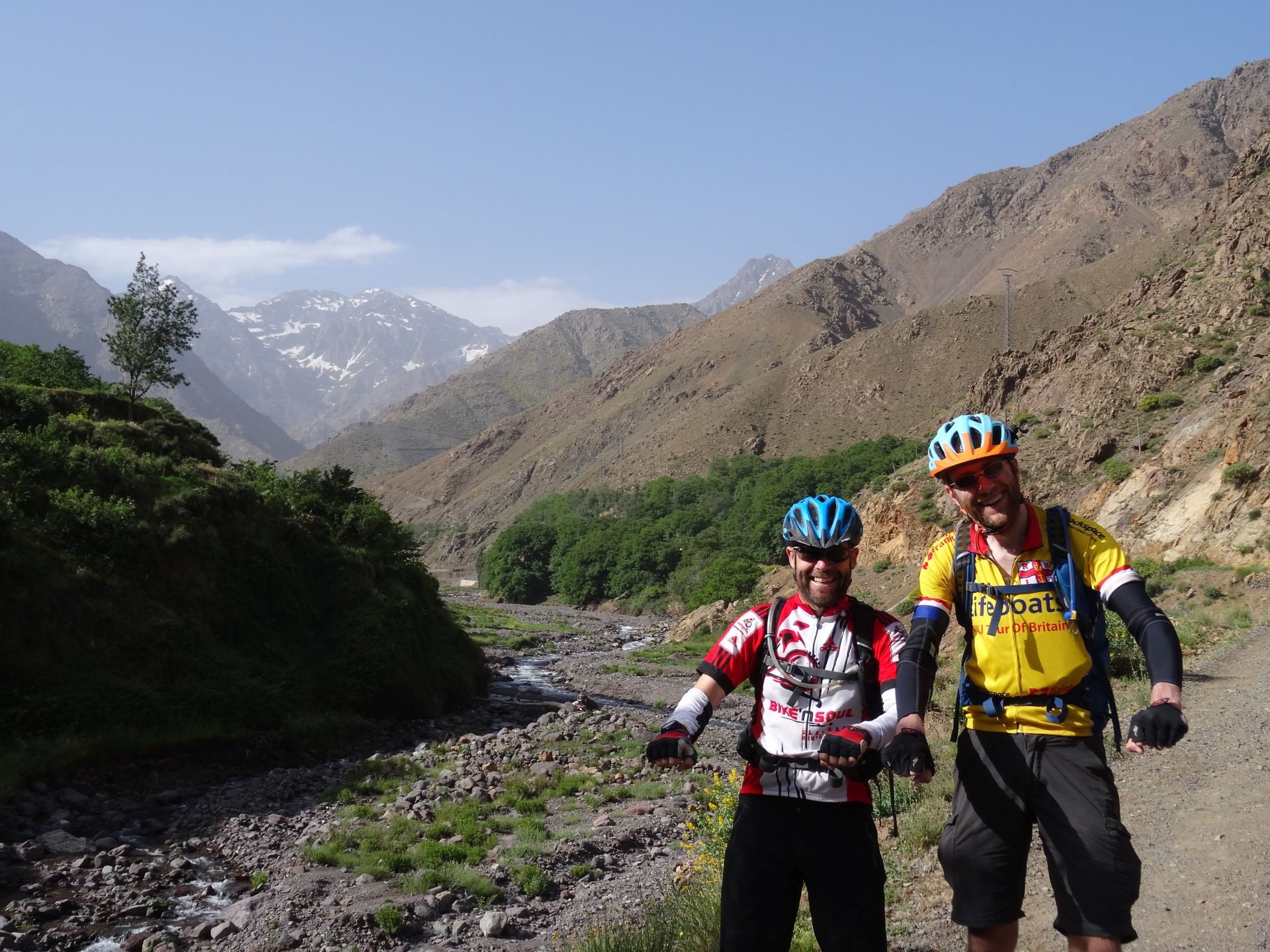 It’s been a long two weeks on the road! We’re on our bikes, right? Right? 😉 ‘Riding’ beside the Asif Rheraya river, on the way back to Marrakesh.
The mountain on the left is the highest peak in North Africa, Jbel Toubkal (13,671 ft). Crikey. © Steve Woodward

Our last day of riding. All smooth tarmac and almost all downhill. It starts off warm and just keeps getting hotter and hotter. We make good time and push on to try to finish before the hottest part of the day. We look for shade when we stop for food but there isn’t much as we lose height and move out of the mountains and into Morocco’s ‘sclerophyllous scrub-forest’ – an arid landscape of tough, often spiny, low-lying bushes and flat ground.

The traffic is building, with trucks now, not just the occasional car that we’ve been used to. Thankfully, the roads generally have a wide shoulder to ride in. We form a train and draft each other to make it easier to cover the ground. Wow it’s hot! As we near Marrakesh city limits we switch to street map view for navigation and wind our way into the centre of the city, signalling and shouting to each other over the now intense traffic noise. After two weeks of relative serenity, it’s a shock to the system! Finally, after five hours, two in increasingly noxious city traffic, we are ‘home’ – or at least back at our riad, where we spent our first night. I check the thermometer on my watch: 49°C! I thought it was hot! But then, we’re not far from the Sahara Desert! 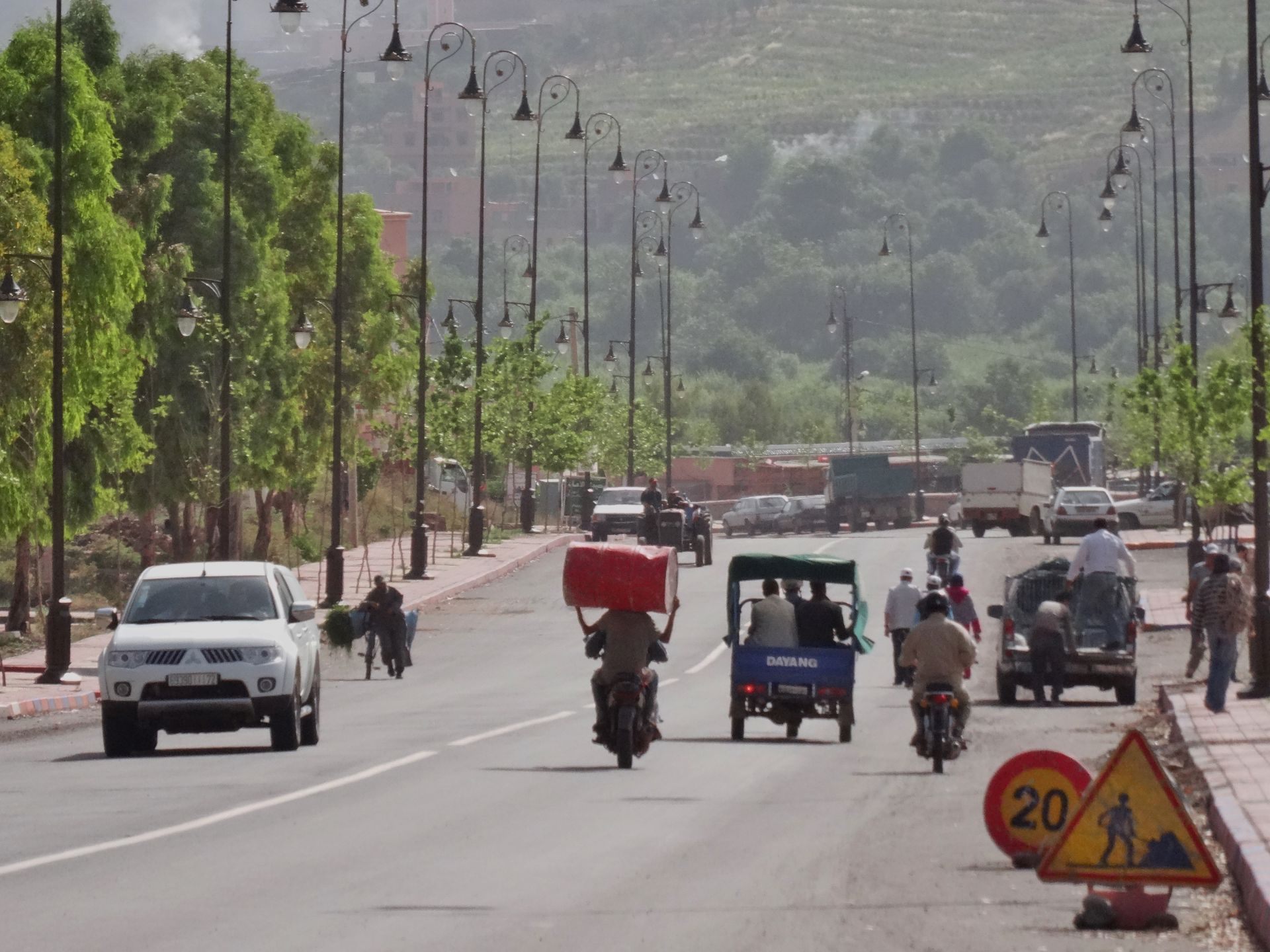 On the way to Marrakesh: improvised ‘roof-rack’ to carry the red oil drum on the motorbike … !
© Steve Woodward

At the riad we relax, have a massage for our weary limbs, lounge in the pool, eat, and over the next night and day explore the souks and main square, the Jemaa el-Fnaa, its freneticism both fascinating and slightly daunting after a fortnight in the middle of nowhere. All too soon it is time to go home, with the same driver who brought us from the airport over two weeks ago. I remember back to that first day, and thankfully my French has improved a little during the trip! 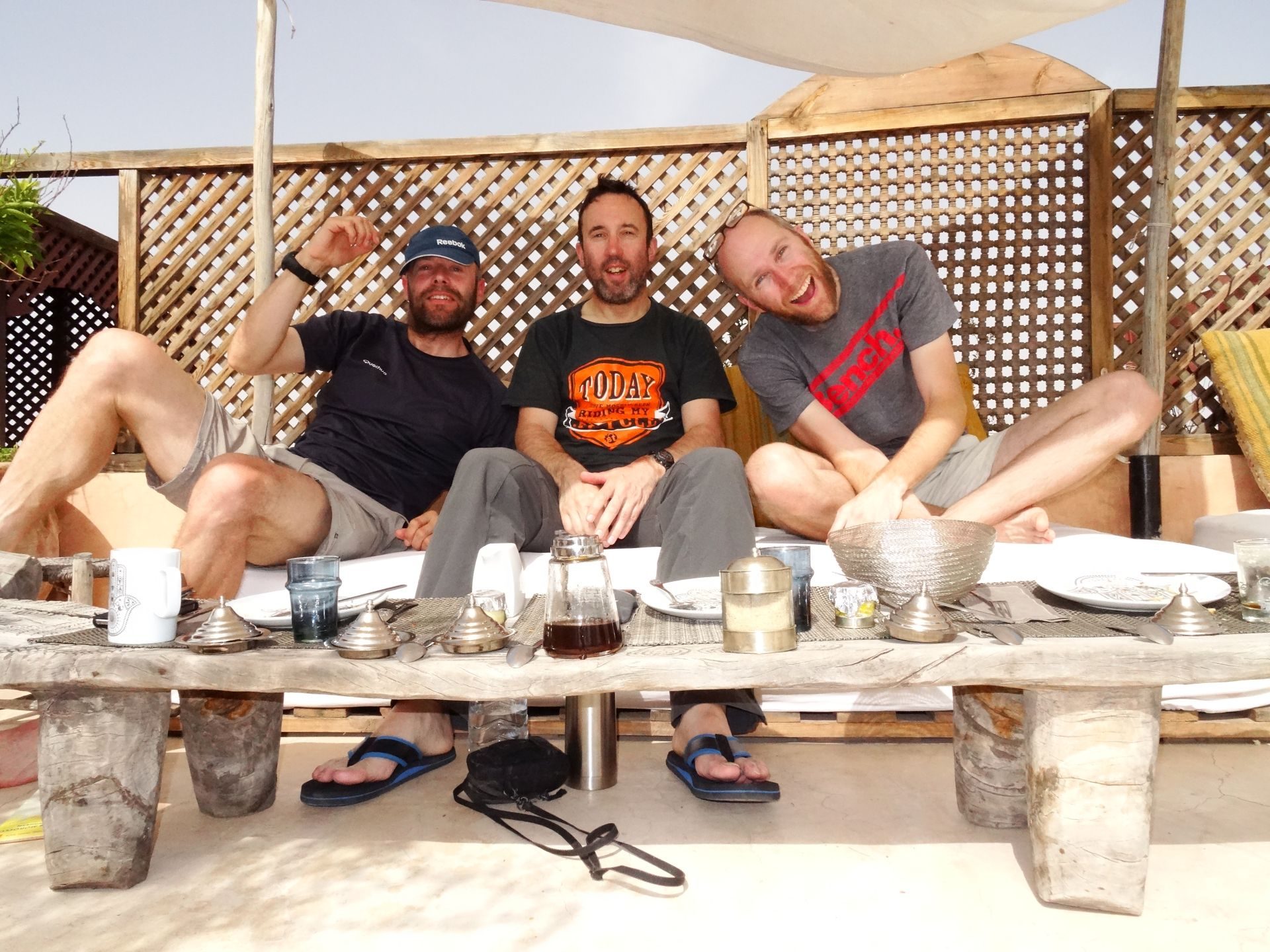 The end – thank you so much & bloomin’ well done Shaun & Steve! © Steve Woodward

It feels like we’ve done something pretty huge together, Steve, Shaun and I. And we have. We may have had to re-plan after that huge day to Anguelz, and miss out a couple of days, but then we wouldn’t have been able to enjoy more time in the keep, Hussein’s hospitality nor the amazing mosaics at Kasbah Telouet. At times it felt like we were on the ragged edge, with long days, illness, altitude, mechanicals in the dark, vicious dogs and searing heat one minute, then biting wind and cold the next. As it was, in nine days of riding we covered 277 hard-won miles; climbed almost 50,000 feet; met wonderful people like Si Moh and Sigi; stayed in an incredible range of accommodation (from mud floors to keeps, dars to riads); enjoyed generous hospitality; ate enough sardines and dates for a lifetime; laughed, careered and teetered on the edge of oh-so-scary drops while somehow riding bikes carrying 50lb of gear; saw some amazing sights including soaring snow-clad peaks and deep ravines that made us feel like we were starring in Raiders of the Lost Ark; and had quite the adventure. Thanks Shaun and Steve. You’re amazing.

Planning & Additional Thanks to:

While planning this trip there was a distinct lack of information about unsupported mountain biking in the region. There were a couple of tour companies that ran fully supported day-rides and trips of a few days close to Marrakesh, but no one still running longer supported itineraries or anything out in the remote eastern reaches of the High Atlas, from where we started our ride. And remember, we wanted to do it unsupported (fools!) We were able to find an old KE Adventure written itinerary (but no route on a map or GPX) from when they ran the trip a few years previously, plus a couple of GPX files at All Trails and the Dutch version of wikiloc which were similar to parts of our route, but we needed to fill in a lot of route-gaps ourselves, plus, with such a big undertaking, we really wanted to actually speak to some people with on-the-ground knowledge if we could (although in the end, we still needed to use satellite imagery to plan a fair chunk of the route!)

After visits to the library to consult trekking and mountaineering guides to the High Atlas, mucho mucho Googling, plus putting out the feelers via a few links that the three of us had to mountain bike magazines and to the off-road adventure motorbike-touring community, over the six months of trip planning we were able to get in touch with a handful kind souls who really helped us out.

So, thanks especially to the following people: Tim Cullis, a renowned expert on off-road motorbiking in Morocco, for his knowledge of some of the dirt-road sections and Atlas regions; mountain bike guide Christian Ferree from Direct Adventures for his input on our chosen route; and Dan Milner photographer, explorer and mountain bike legend for his route input too.

Thanks to Peter Buitelaar from Bikers Home, a motorbike tour company, for arranging the 4×4 transfer from Marrakesh to Imilchil; and to Béatrice Buschor at Flilou La Maison Berbère, Agouti, for helping us book the mules and muleteer over e-mail! (thanks to Jamal and Omar too)

Finally, thanks to all of our wonderful accommodation hosts once again, and to the people of Morocco – you helped make our experience far far more than just about the riding 🙂